Peaches and a Plane Crash in the Pines

The other morning, as I was enjoying my pancake breakfast, a vision flashed through my mind, triggered by the taste and smell of that deliciously sweet, golden peach syrup that I had liberally poured over the ample stack of hot cakes. It’s strange how certain tastes and smells can trigger thoughts in one’s mind that have laid hidden for long periods of time. Such was the case here, as visions of isolated Pine Barrens woods and a silver airplane flashed through my mind.
Shortly after Jackie and I moved to New Gretna in the early 1970’s our new neighbors, Murray and Jean Harris, invited us to go pick peaches on a farm in Tabernacle. With the pleasant thought of warm toast and peach jam on a distant winter morning in our minds, we accepted and were on our way. After a delightful hour or so of picking a few baskets of large, ripe, golden peaches in the hot summer sun, we headed home.
Now, if any of you know Murray, you know that it is always an adventure traveling with him. One of his idiosyncrasies is that he never returns home the same way that he arrived at a destination. Needless to say, that can often cause some unexpected consequences, as he often is somewhat unclear or unfamiliar with the return route. Such was the case on our great peach picking escapade.
I can remember it as if it were yesterday. Murray, turning his head around toward the back seat and innocently asking, “Have you guys ever been to the Carranza Memorial?” as the car swerved slightly from side to side.
“No, never even heard of it.” was our reply, as the car suddenly veered off the smooth blacktop road and onto a bumpy sand road that often seemed more like a twisted trail than a road. After what seemed to be a lengthy ride, we arrived in a small clearing in the middle of the pines. Nothing was around but a pair of turkey buzzards slowly circling overhead. I remember thinking that I hope that’s not an omen. There was an eerie silence.
As we got out of the car, Murray quickly broke the silence as he yelled, “We’re here!” We found ourselves standing next to a large stone obelisk rising up out of the Pine Barrens' sand toward the bright blue sky. Before we had a chance to read the nearby sign or the inscriptions on the stone, Murray began telling us the story of a “Mexican Lindbergh” who crashed here in the desolate pine woods some 80 years ago. 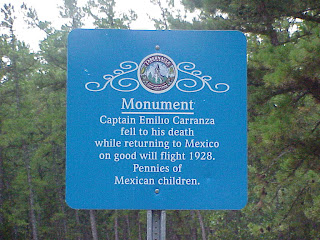 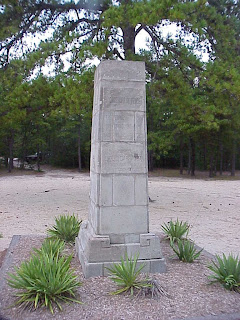 We were standing on the spot where Mexican aviator Captain Emilio Carranza, on July 13, 1928, crashed in his plane the Mexico Excelsior, the victim of a lightning strike. Scarcely a month before, he had completed a historic goodwill flight from Mexico City to Washington D.C. in bad weather, making only one stop to refuel. He had no instruments aboard other than a compass, a map, and a flashlight. It was one of the longest flights made to date (only Carranza’s friend Charles Lindbergh had flown further, in his historic trip across the Atlantic), and the longest by a Mexican aviator. Carranza was hailed as a hero in both nations, and greatly honored, even meeting the President and reviewing the troops at West Point, the lowest ranked foreign officer ever to do so. He made plans to leave on July 3rd, hoping to arrive back in Mexico City on July 4th, the United States’ Independence Day. However, his flight was cancelled due to bad weather. He rescheduled for July 12, but was again grounded due to poor weather conditions. He returned to his hotel and was eating dinner when he received a telegram from the Mexican military. He immediately returned to his plane and took off, despite the pleas of those around him. 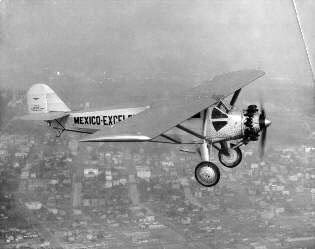 Pieces of his plane were found the next day by a child named John Carr and his mother while picking blueberries. Carranza’s body was discovered, still clutching his flashlight, by members of Mt Holly American Legion Post #11 later that day. Newspaper headlines across the world cried out the death of the young hero of the Mexican people. Carranza's body was taken to Buzby's General Store, in Chatsworth, where it layed until the coroner made the pronouncement of death and the remains were officially identified. The body was then shipped back to his family. Two years later, the Carranza Memorial was erected on the spot that the young hero's body had been discovered, paid for with the donations of the children of Mexico. Every year since then, a ceremony is held at the memorial on the second Saturday in July at 1 PM  to commemorate Emelio Carranza's couragous flight.
I have always wanted to go to the ceremony, which starts with a solemn service followed by a festive celebration with samples of authentic Mexican foods and lively Mexican music. Unfortunately, I am either busy on the celebration day, or I just simply forget. Hopefully, one of these days I will remember and go. Perhaps I'll see you there! 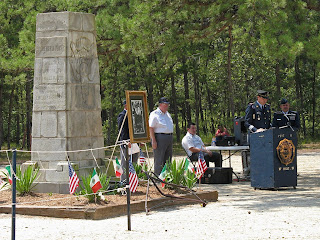 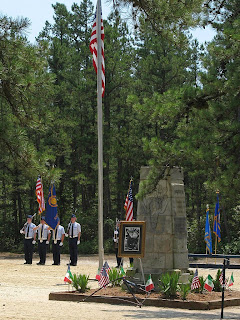 After reading the inscriptions on the stone monument, we quickly got back into the car, the hot summer sun making it feel like an oven. I remember thinking that I’ll sure be glad to get home and get a cold drink. The ride home would normally have been only about twenty minutes or so, but I had forgotten that Murray was driving. The adventure had just begun. I remember him saying something about these roads look a little different then I remember them, as we began an hour and a half journey along the twisted, bumpy sugar sand roads. After hitting more than a few dead ends and backtracking often, we finally emerged from the pinewoods and onto real, paved roads.
The car finally pulled into our North Maple Avenue driveway. Murray opened the truck, so that I could get the peaches. I had almost forgotten about them in the excitement of our serendipitous journey. As I took the first basket out, I quickly noticed the effect that the sun baked trunk and bumpy Pine Barrens roads had on the baskets of dead-ripe peaches. I don’t think there was a peach in the basket that was not badly bruised. It was obvious that they wouldn’t last long before rotting.
Well, we stayed up late into the night making peach jam out of those bruised peaches. We were afraid that if we didn’t use up the peach quickly we would lose them. We also learned another important lesson about making peach jam . . . Follow the recipe closely! In an effort to finish the batches more quickly, so that we could get to bed at a semi decent hour, we doubled the directions. The effect of this decision was obvious when we opened the first jar a few weeks later. It seems that we had made a couple dozen jars of peach syrup. The jam never jelled. Oh well, fortunately I’m a big fan of pancakes, and I found out that I liked peach syrup.
So, every time I have pancakes and peach syrup, my mind flashes back to that day in the pines when I first saw the Carranza Memorial. It’s an adventure that I will never forget.    - Pete S.
PS- Anyone out there have a good fool proof peach jam recipe?

Posted by Pete Stemmer, moderator at 8:33 AM