There is always quite a bit of interest in the Mathis family, as evidenced by the recent questions regarding Cecil Mathis. We pretty much covered Cecil and his immediate family in our last Blog entry, where we also gave family information for his parents, Leon Hilliard and Verda Mathis, and his paternal grandparents, Joshua and Rebecca Grant Mathis. Their family information is reproduced below, so that you do not have to page back to last Wednesday's Blog to refresh your memory. It was transcribed from the family history from Jean and Murray Harris' "The Mathis Family of Little Egg Harbor".

Today, I thought that I would put a face on Joshua and Rebecca Grant Mathis. Fortunately, I have photos of them from an old Mathis family photo album compiled by Sarah Allen Ware, the late wife of Howard Ware. Howard currently lives on North Maple Avenue and is well known around New Gretna for growing the best lima beans in the area. Sarah gave the album to Ben and Elaine Allen who loaned it to me so that I could scan the photos for our Bass River Photo History Collection. I thought I would share some of the photos here on the Blog, along with some census information which, together, shed some additional light on the family.

We find a 16 year old Joshua, at the time of the 1880 Bass River Township census, living at home with his parents, Aaron and Esther Mathis, along with two sisters and a brother. His father, Aaron, a farmer, is listed as being blind. In a few conversations I had some years ago with some New Gretna old timers, they referred to Aaron as "Blind Aaron". It appears that his affliction became a part of his name.

The first census that we see Joshua and Rebecca married is the 1900 census which finds them living in Shamong Township. I have no idea regarding why they were living there. Perhaps one of our Blog readers can help out there.

The snapshot of the family provided by the 1900 census shows that Joshua and Rebecca have been married for 8 years and have three girls- Ray, Margie, and Martha. Joshua, born in 1863, is 36 years old, tens years older than his wife, Rebecca. His occupation is listed as "Bayman".

The 1910 census shows that Joshua and Rebecca have moved to Bass River Township and live on East Greenbush Road with a growing family which now includes 6 children - Ray, Neveda (Listed as Margie in the 1900 census), Martha, George W., Leon, and Delia.

Joshua and Rebecca's home on East Greenbush house is no longer there. Elaine Allen described its location to me over the telephone. I hope that the following map accurately shows where the old Joshua Mathis homestead sat. If not, I'm sure that I will hear from Elaine, in which case I will revise the map. 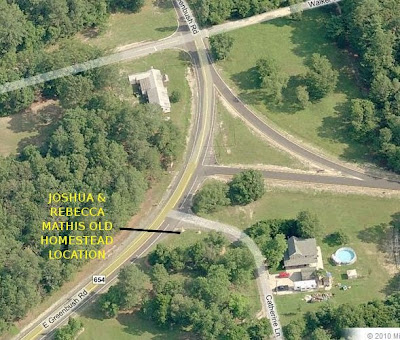 The last census where we find Joshua and Rebecca is the 1920 census, as Joshua died on August 21, 1921. Changes have occurred in the family. Ray, Marjorie Nevada, and Martha are no loner living at home and Clarence and Herbert have joined the family since the 1910 census. The family is still listed as living on East Greenbush Road.

Having lost her husband, Joshua, on August 21, 1921, we find Rebecca, in the 1930 Bass River Township census, still living in Bass River Township but having moved to New York Boulevard (Now Rt. 9) with only sons Clarence and Herbert living at home. Clarence is listed as a State Forest laborer.

I find these first two photos interesting as they show Rebecca Grant Mathis with her sister, Rachel, at a young and old age. 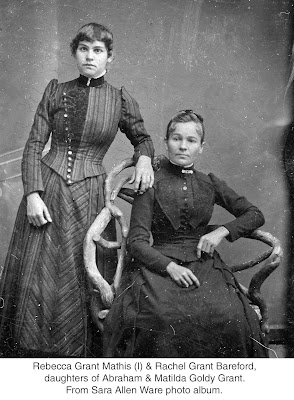 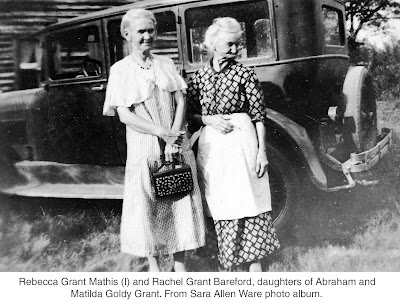 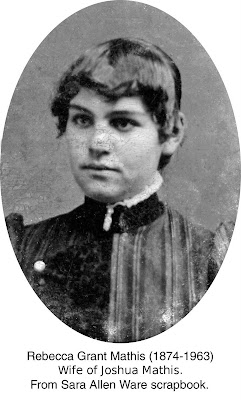 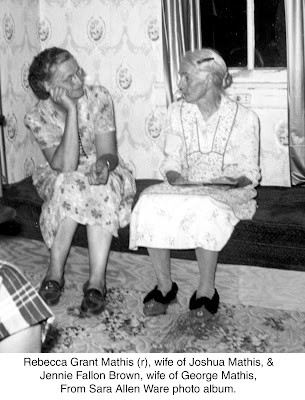 Joshua and Rebecca had quite an influence on our area's genealogy, as evidenced by their children, 25 grand children, and 43 great grand children mentioned in Rebecca's obituary. 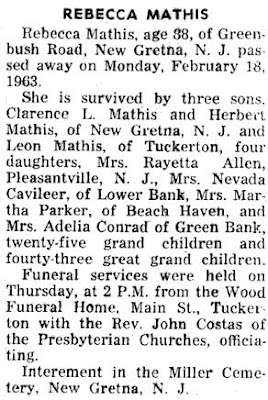 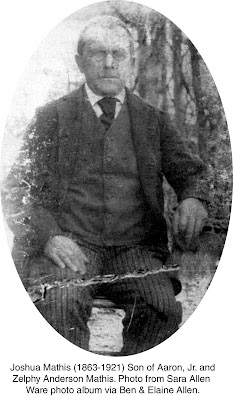 That ends today's little journey back in time to visit with Cecil Mathis' paternal grandparents, Joshua and Rebecca Grant Mathis. Be sure to join us next Wednesday for some photos of their children.

PS- Beverly, The above are some more photos from the Mathis photo album that you have been so interested in.
Posted by Pete Stemmer, moderator at 9:00 PM