Last Wednesday I posted a 1924 advertisement, reprinted below, from the New Gretna Methodist Church Directory regarding a Mrs. G. Seel and asked for help in identifying who Mrs. G. Seel was and where her business was located. 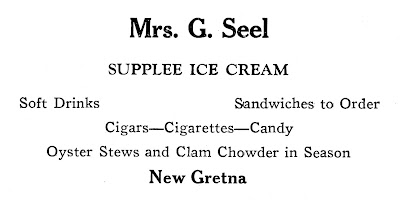 I specifically appealed to Dave Kalm, Clif Brown, and Don Maxwell, as they have a wealth of New Gretna knowledge from their earlier days in New Gretna. I didn't hear from Dave or Clif, so I'm going to assume that they have no recollection regarding Mrs. Seel. I also put eagle eye Jim McAnney on the case but, he too, came up empty. He had a few wild theories, including one which had Mrs. Seel running a house of ill repute and thus keeping a low profile in town, but nothing concrete.
Happily, I did hear from Don Maxwell. Unfortunately he didn't remember hearing about Mrs. Seel; however, he did remember Supplee ice cream being sold in New Gretna and told about another, often forgotten, New Gretna restaurant located where Munchies now sits. I thought I would share Don's email with you, as his stories are always informative and interesting. I wish I could get him to write more often.

Pete,
I can't say that I can recall any Seel's restaurant in New Gretna. however my earliest recollection of the little restaurant on the S.E. corner of South Maple Avenue (commonly called Eel Street in those days), sort of diagonally across from our house next to the Rustic, had a Supplee ice cream sign hanging out in front of it for years. My dad, Curtis Maxwell, told me he built it for Harry "Nic" Mathis and his wife, Aunt Sally. She was my mother's aunt (my Grandmother Allen's sister) who was Keefer Allen's wife and my mother's mother. They ran a restaurant there for a number of years. I don't know who they sold to. 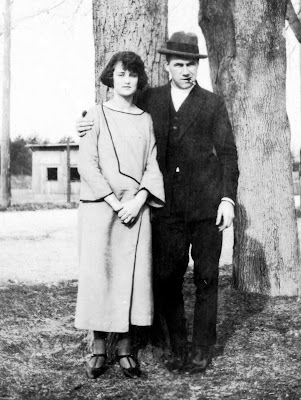 My earliest recollection of the proprietors of that place was William Cramer and his wife. He was called Bill Butcher, as he went into the butcher business after he and his brother, Ward, retired from the glassblowing business somewhere down in South Jersey. He had a butcher shop in the back with sawdust on the floor with a big walk in box, and his wife (I know her name, but it eludes me at the present) ran a restaurant in the front.
I remember mom sending me over for a quart of ice cream (Supplees) and she would dip it out with a large spoon into a quart container that had the top folded up after filling. When she finished, before replacing the spoon back in the water, she would lick it first. I remember a lot of people complaining about that practice.

A 1904 Supplee ice cream poster
(Photo from Google Images)
The Cramers had no children and didn't get along very well, as he was always complaining about how nosy she was. Every time he had a meat customer she would peek around the corner, and he would say here comes the old battle axe.
After he retired from that business, Delwyn Downs took it over; however, he didn't last long. Delwyn clerked in Clarance Mathis' store for a number of years. After that, he went into the well drilling business. He drilled a lot of wells around New Gretna for years.
Don Maxwell 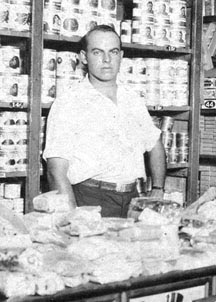 Delwin Downs worked behind the counter and delivered groceries throughout New Gretna from Clarence Mathis' store for many years. (Photo courtesy of Norman and Ann Mathis.)

Now, back to the case at hand. Every good detective knows that if you keep working on a case and get the word out that, eventually, you will get a breakthrough. Such was the case here. My history buddy, Steve Eichinger, came to the rescue. The name "Seel" didn't ring a bell with him; however, he suggested that we visit the Township Tax Office and check the old tax books from the mid 1920's. If the Seels owned property in town, their names should appear in the tax records.
Steve and I spent an hour or so this afternoon in the Bass River Township Tax Office pouring over dusty tax books from the mid 1920's. Unfortunately the 1924 tax book, the year of Mrs. G. Seel's advertisement, was missing. My expectations were dashed. We then set out to look at the years before and after 1924 and hit pay dirt.
Suddenly, as Steve was reading through the 1925 tax book, the name "Seel" lept from the bottom of page 13, and Steve let out a loud "Yippie". I knew that was a good sign. Who said that 13 was an unlucky number? Nestled between Sadie Downs and Kirk Loveland on West Main Street, the present day Route 9, was Gustav Seel. The handwritten record showed that he was taxed on 2 acres of land, a dwelling, and an outbuilding.
Tax records don't list the family members, so I can't tell you the first name of Gustav's wife, the Mrs. G. Seel listed in the ad. Probably, the "G" referred to her husband, Gustav. Back in the old days, the wife was often referred to in terms of her husband. Such was likely the case here. Of course the "G" may have been for Gertrude or Gail, but I doubt it.
Fortunately the manner in which they kept the tax books in the 1920's was a help in figuring out just where the Seels lived. The names were listed in the order of the houses on the street. While we were unsure as to just where the Seel house was, we were familiar with the house location of some of the adjacent names. This allowed us to determine the Seel house location which is shown on the map below.

The Seel home was located on the present day Route 9 on your right as your are approaching the intersection with Amasas Landing Road. (Photo from Bing Maps) 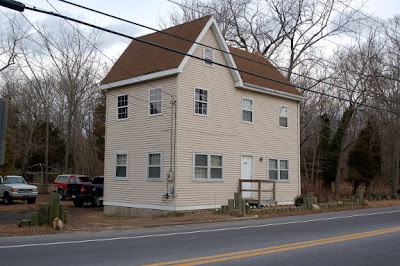 This is the present day Route 9 house that Steve and I believe belonged to the Seels in the mid 1920's. (January 24, 2009 photo by Pete Stemmer)

Since no one seemed to remember the Seels nor did they leave much of a paper trail, it is likely that they didn't live in New Gretna for long. The tax books confirmed that viewpoint. The Seel name was absent from the 1923 tax book. A "L.V. Brewin" occupied the same house in the 1923 tax notations which documented the dwelling on 2 acres and also listed a store at the same location. This established that a business was run from that house just prior to the Seels obtaining the property. It would not be surprising that Mrs. Seel would also choose to run her food enterprise from the same location, as the house would have already been configured for a home business. Somehow, it seems her business escaped the eyes of the tax assessor.
Even though the 1924 tax book was unavailable, we know that Mrs. Seel was operating a business, likely from her home, by her ad in the 1924 New Gretna Methodist Church Directory. Some elementary deduction tells us that the Seels moved to New Gretna between the end of 1923 and July, 1924. 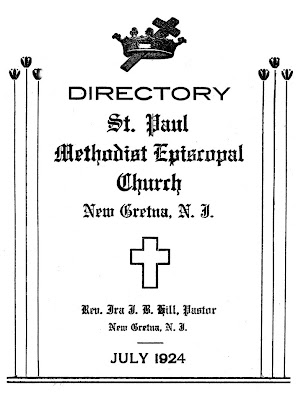 The front cover of the July, 1924 Methodist Church Directory which contained Mrs. Seel's ad tells us that the Seels were in New Gretna in July, 1924. (Methodist Directory courtesy of Marian Broome.)

An examination of the 1925 tax book failed to find the Seels listed, indicating that they left New Gretna somewhere between July, 1924 and the beginning of 1925. Their stay in New Gretna was, indeed, a short one.
Well, that ends our little journey concerning the Seels brief business dealings in New Gretna. I haven't had a chance to track them down in the 1920 census, prior to their coming to New Gretna or in the 1930 census after they left New Gretna. I would like to find out Mrs. Seel's first name. Perhaps an enterprising Blog reader will take on that challenge.
I did find a Gustave Seel in the Social Security death records. He was born June 21, 1889 and died December 1975 in Pleasantville, New Jersey, not far from New Gretna. He applied for Social Security in New York prior to 1951. That indicates a definite New York connection which may be a clue, if this is our Gustave, in fitting some more pieces of the puzzle together. The hunt never seems to stop in this history business.
P Stemmer
Posted by Pete Stemmer, moderator at 8:00 AM