With Memorial Day fast approaching and the 4th of July not far behind, many Bass River residents are getting their American flags ready for display. Helen Carty, a Trustee in the New Gretna Old Home Society (the organization that maintains Miller and Hillside Cemeteries in New Gretna) will soon be placing crisp new flags on the veteran's graves, as she has done for many years. She has been honoring the veterans in our cemeteries since she was a child. 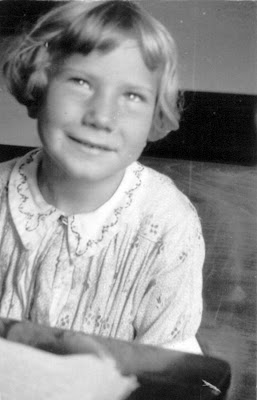 It clearly is a time for reflection and thanksgiving for all those who have served, fought, and died for their country in a variety of capacities.

Thinking about our flag and the sacrifices of those who have served under it, brings to mind the Adams-Eichinger family of Bridgeport, that small Bass River Township neighborhood that is nestled on the Wading River adjacent to the bridge. 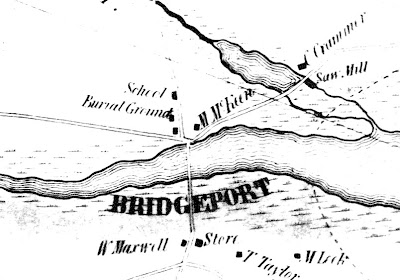 Bridgeport as shown on the 1849 Otley-Whiteford Map. The Adams-Leek-McKeen Cemetery and a school house operating in the old Quaker Meeting House, on the present day Leektown Road, are just a stone's throw from the McKeen Hotel. Charles Cramer's house and saw mill can be seen just down the present day Hammonton Road.

It was at Bridgeport that a young Martina Adams, more than 75 years years ago, helped display a very special American flag on her families' rooftop. Martina, who later married Stephen Eichinger, Sr., was the mother of my good friend and history buddy, Steve Eichinger, Jr. A young Martina Adams, standing on the roof, helped to display the "Lincoln" flag at the home of her mother, Martha Downs Adams Merchent, and her step father, Samuel Merchant, at Bridgeport on the Wading River. (Photo courtesy of Stephen Eichinger, Jr.)

The story of that special flag was told in a February 13, 1933 newspaper article involving three Bridgeport women who had been making an American flag in the old McKeen Hotel to celebrate the end of the Civil War when they heard the tragic news that Abraham Lincoln had been assassinated. They then added two black stripes of cloth to morn the popular President's death. Martina Adams is holding the flag in the photo accompanying the article. 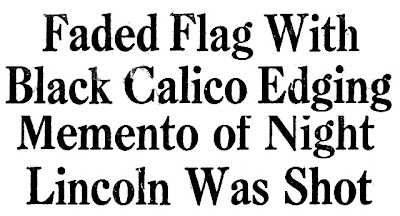 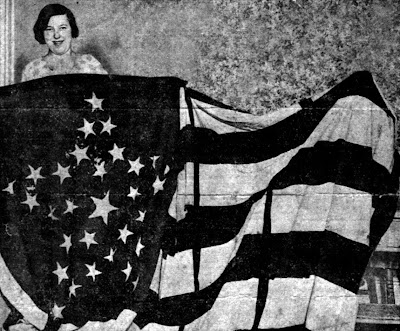 The flag was handed down through the years from the McKeen to the Adams and finally to the Eichinger families in the following chain: (1) Sarah McKeen, who helped make the flag,  was the daughter of Robert and Margaret McKeen who owned and operated the Hotel. (2) The Hotel and the flag passed on to Catherine McKeen, Robert and Margaret's daughter. (3) The Hotel and flag passed on to Anna Staza Adams, Catherine McKeen's niece. (4) After Anna Staza's death, the Hotel and flag passed on to her grandaughter, Alice Adams. (5) From Alice, the flag passed on to her sister, Martina who married Stephen Eichinger, Sr.
Stephen Eichinger, Jr. remembers the flag being stored in the attic of the old McKeen Hotel where he lived as a young boy. The family would unpack it once a year when they cleaned the attic. 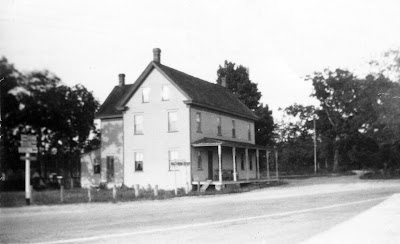 The "Lincoln" flag was stored in the attic of the old McKeen Hotel (above) when Steve Eichinger, Jr. was a child. (1939 photo courtesy of Stephen Eichinger, Jr.)

When the Eichinger family moved down the road to the home where June Eichinger presently lives, the flag followed. Over the years the cloth became more and more fragile until it eventually disintegrated in the mid 1950's, a piece of history lost. 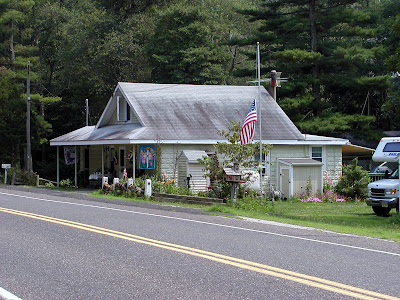 The old Merchant gas station became the home of Martina and Stephen Eichinger and, later, their son Lee Eichinger and his wife, June. Lee passed away on October 31, 2007, and June lives in the Eichinger home on the Wading River, today. (July 21, 2004 photo by Pete Stemmer.)

I am thankful for my friendship with Steve Eichinger who grew up in this area. He has generously  shared his childhood memories and family history with me. Without his friendship, help, and encouragement, I would have never gotten so involved in New Gretna history which has become an important part of my life. I think of us as the New Gretna History odd couple. 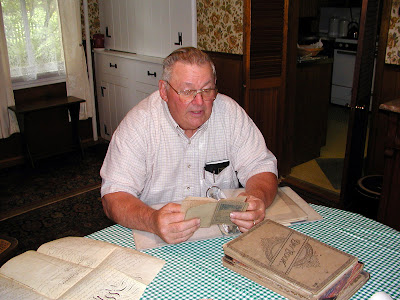 Steve has been a big help in the collection of Bass River history and our efforts to pass it on in various ways, including the Bass River Gazette and the Blog. (May 28, 2003 photo by Pete Stemmer.)

Pete S
Posted by Pete Stemmer, moderator at 8:00 AM