One of the things that I particularly like about the study of New Gretna history are the many unique individuals that made up old time New Gretna. One such person was John Q. Post. He was clearly a man who marched to the beat of a different drummer. 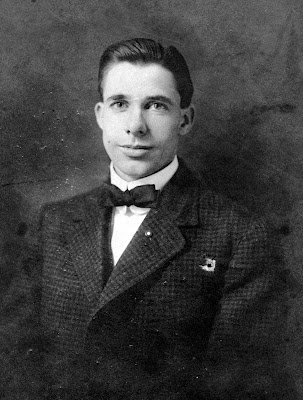 Shortly after Jackie and I moved to New Gretna in the early 1970's, I remember seeing John Q. Post sitting at the front window of the New Gretna Post Office which was also the home of the Post Mistress and John Q's daughter, Naomi Post Maurer (See #1 below). He was an elderly man by then, just entering his 90's. Being a transplant from the big city of Toms River, I was not much interested in New Gretna history at that time, so I didn't take the time to stop, meet, and talk with John Q. As I became interested in our local history in the mid 1980's, somehow, I never seemed to have the time to become acquainted with this most interesting individual. John Q. passed away on May 23, 1995 at the age of 112. It was like losing a library and me never having a library card. What memories he could have shared and stories told. It's a loss that I still regret. 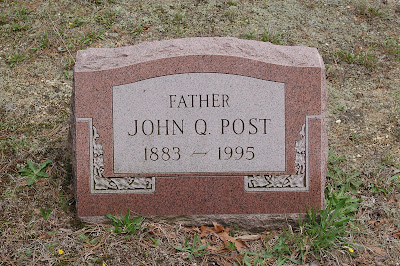 John Q., known affectionately in the New Gretna community as "Johnny Q.", was not a New Gretna native. Born in Ovid, New York in June, 1883, he lived in many places besides New Gretna. A carpenter by trade, he followed the work opportunities to Camden, Wilmington, and Pleasantville. He always seemed to return to New Gretna which he did for the last time, in 1975, when he came to live with his daughter, Naomi Post Maurer. All in all, a good part of his life and the friendships he developed revolved around New Gretna.

John Q. was a religious man with a passion for God's Word. He graduated from the Cleveland School of the Bible in Canton, Ohio in 1914. It's name was changed to Malone College, in John Q's senior year. It is likely that his first preaching assignment was at New Gretna, as he served as pastor at the New Gretna Methodist Church in 1915. He could be called a evangelical Methodist which was not the norm, especially in New Gretna. Later, while a parishioner in New Gretna, it was not unusual to see him dancing in the aisle with arms raised and shouting praises to his Lord. In the mid 1940's, he helped to form a church in Pleasantville where he was ordained in the "For God and Country" Church. 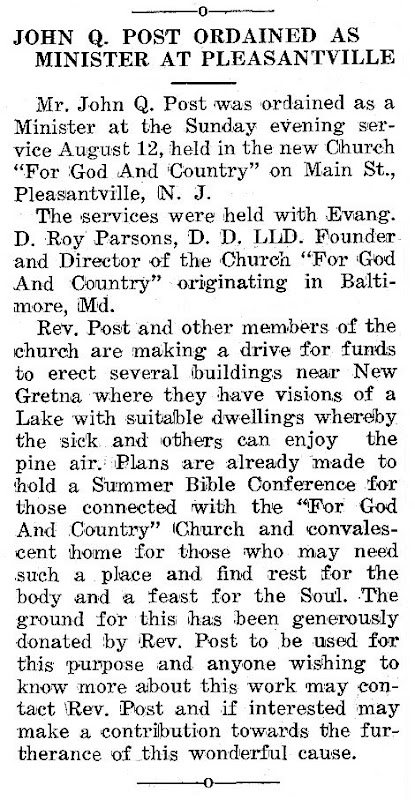 John Q. helped to start a church in Pleasantville where he was ordained on August 12, 1945. Unfortunately, his vision of a Church based Conference Center and Convalescent facility at New Gretna were never realized. (August 16, 1945 Tuckerton Beacon news article.)

John Q., at the age of 35, married Sara Adams in 1917. She was the daughter of James and Annie Adams whose homestead later became the Leepa farm on today's Leepa Lane in the Frogtown section of Bass River Township. 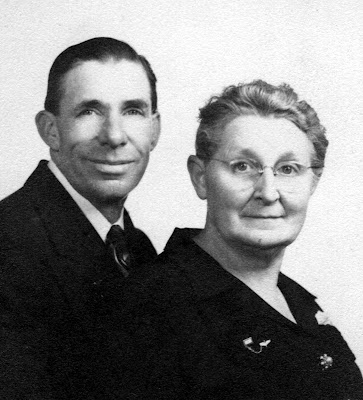 We don't know what originally brought John Q. to New Gretna. We know he came in 1915 to preach; however, Naomi remembers her father saying that he delivered logs from New York State to the New Gretna area saw mills. Perhaps, he met Sara in 1915 as a young preacher or earlier during one of his trips delivering logs. Either way, the result was the same. He fell in love and decided to settle in New Gretna.

John Q. was an energetic individual who was always looking for an opportunity which would provide for his family and be an adventure to him. In the 1920's he owned a grocery store on New York Road, now Rt. 9, across the street from Chalkley Cramer's Hardware store. The 1920 Census lists John Quincy Post living on the Main Road in New Gretna with his wife, Sara, and son, James. He was operating the store at that time as his occupation is listed as a General Store Merchant. Sara is listed as a Store Assistant. Ben Allen remembers these times when John Q. delivered groceries to his customers in a Model T panel truck. Naomi was born, in 1923, in the family's apartment above the store. Her brother, James Clarence (everyone in New Gretna knew him as Clarence), was born 6 years prior in Camden. Unfortunately, the grocery business didn't pan out, as a combination of John Q's generosity and hard economic times forced John Q. to close the business. Naomi reports that her father just didn't have the heart to collect on the grocery bills of his hard pressed neighbors and friends.

The 1930 Census shows, John Q. and his family living with his sister-in-law, Miss Margaret Adams (See #2 below), in her home just east of the Methodist Church on New York Boulevard, now Rt. 9. His occupation is listed as a House Carpenter. 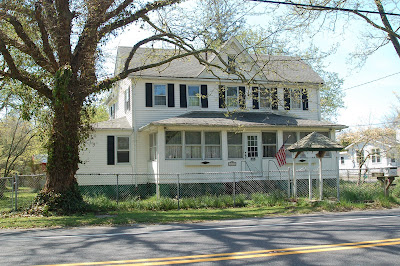 When the Great Depression hit, John Q., as did many other New Gretna men, worked at the Bass River CCC Camp building Lake Absegami and Bass River State Park. The pay of a dollar a day provided hard money that allowed the family to scrape by. 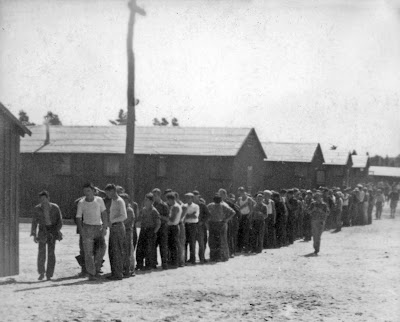 A line at the Mess Hall at the Bass River CCC Camp where John Q. ate many meals while working at the camp during the Great Depression. (Photo courtesy of John Niskey.)

In between carpentry jobs, John Q. somehow found the time and energy to construct and develop a cranberry bog at the Prince Place in the pine woods in upper Bass River Township. His granddaughter, Sharon Maurer, remembers visiting John Q. and playing at the Prince Place cranberry bog when she was in the third grade. There was a small brick building on the property with no electricity. Water was obtained with an old pitcher pump in the yard. It was clearly roughing it and right up John Q's alley.

Even in his later years, John Q. continued to pursue adventure. In his late 70's he acquired a gold claim at the Marleau Porcupine Claim area in Ontario, Canada. Bought as an investment, he had to make yearly two week visits to the claim in order to keep his ownership. The following August, 1961 news article indicates that John Q. was planning to return to South Porcupine in a year. That's quite a trip for a 79 year old New Gretna resident.

A story I remember hearing about John Q. occurred when he was in his late 80's and developed cataracts. At that time it was a major operation and the doctors, taking his age into consideration, recommended that he not have the operation. Who knew that he would go on to live almost two more decades. So, unfortunately, John Q. spent his later years with a somewhat cloudy view of his world. His mind, however, was sharp until his final breath. 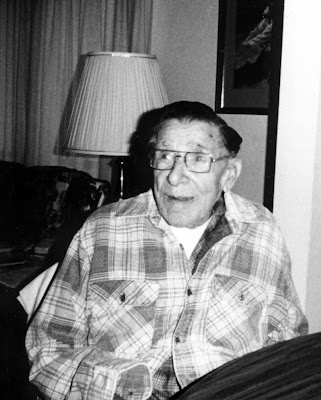 I feel privileged to know John Q's daughter, Naomi, and granddaughter, Sharon. I enjoy their company immensely and see many of John Q's qualities in their lives. They are good, cheerful, God fearing people who truly love their neighbors and sometimes march to the beat of a different drummer .  .  . much like John Q. I guess the apple doesn't fall far from the tree.

(2) "The Farmer in the Dell and Miss Margaret's Missing Ring" at http://bassriverhistory.blogspot.com/search?q="Missing+ring" talks about Miss Margaret.

Posted by Pete Stemmer, moderator at 8:00 AM