Well, it's time to dust off the old Time Machine again. If I let it sit too long, the controls start to stick,  and I have all kinds of trouble getting back to the present.
Let me take a few minutes to set the dials and see if I can get a little preview of what's in store for us on this trip. Ah, that's got it! We're about to go back to New Gretna on June 19, 1947. It appears that the normal things are going on in the two churches in town; the Methodists are having a $1.50 turkey dinner at the Knights of Pythias Hall; the local New Gretna School is quite active with PTA activities and a closing day skit by the children; a festive June wedding is celebrated; Bill Sears, Eleanor Downes, and Betty Elberson (now Petzak) graduate from Tuckerton High School; the local movies are popular; we'll be stopping by Clif Brown's parent's house on West Greenbush Road; Miss Margaret pops up again; and the local "gossip" mentions some familiar names.
It should be an enjoyable trip, so put on your Time Travel goggles and  hang on tight   .    .    .

Message by the pastor

Evening Worship 8:00: Message by the pastor

On Saturday, June 21, the Mullica River Parish Youth Fellowship will attend the New Brunswick District Picnic to be held at the Ocean County Park in Lakewood. Those interested in going meet at the parsonage at 10:30.

On Tuesday evening, June 24, the Bible Class will meet at the home of Mrs. Helen Mathis.

Keep this date in mind—on June 28, at 8 o’clock in the evening we will hold a Patriotic Service in our Church. At this service all the Patriotic Or­ganizations of our Community are invited to attend. Keep this date and plan to worship with us.

2 p. m. Wednesday afternoon of this week the Ladies Auxiliary held their monthly luncheon meeting at the home of Mrs. H. Z. Mathis.

Sunday evening the Children’s Day service was held in the church, the children gave recitations and songs and were all to be complimented for their part in the entertainment. A large congregation was present to witness it. Rev. Cox administered the right of Baptism to the infant son of Mr. and Mrs. Clifton Allen. Last Sun­day the three daughters of Mr. and Mrs. Stanley Cramer were baptized.

The final meeting of the New Gret­na P. T. A. was held in the School Auditorium Wednesday, June 11th, at 3 p. m. The retiring president, Mrs. Olga Pflaum presided and held the election of officers. The following officers were elected for next year:

Many helpful suggestions were given to promote PTA activity by all methods of publicity. The PUBLICITY RECORD BOOKS were on exhibit. Several of them were outstanding, and all of them had useful ideas for goals, benefits and CHILD WELFARE objectives.

“Farmer In The Dell” Primary room “   the Beautiful” School

The wedding of Mildred of New Gretna, and T. G. Fels­berg, of , took place in the Presbyterian church, New Gretna. Saturday, June 14, at p. m. The double ring ceremony was performed by The Rev. George R. Cox, pastor of that church.

“Oh, Promise Me,” “Because,” and “Oh, Perfect Love” were played on the organ by Mrs. Fred Shropshire.

The bride, who was given in mar­riage by her father, Fred W. Shrop­shire, wore a dress of white satin, with long train, finger-tip veil with a coronet of seed-pearls, and carried an arm bouquet of white rosebuds.

She was attended by her sisters, Jean Harris and Alice Mathis, both of Tuckerton. The matrons of honor wore matching dresses of Aqua and peach tulle, with shirred jackets and match­ing headdresses of net and flowers. They carried arm bouquets of peonies and Siberian Iris.

The best man was Arthur Felsberg, brother of the groom.

Refreshments and wedding cake were served to all guests at the home of the bride, at 3:00 p. m.

Dinner was served from 4:30 until 7:00 to 40 friends and relatives of the bride and groin and photographs were taken by Benjamin Harris of Tuckerton.

Wedding guests were entertained in the evening by R. T. Robinson of Pleasantville, who delighted old and young with his sleight of hand and tricks of magic.

The young couple left for a two-week trip to Niagara Falls and Can­ada. After their return they will be at home at , Pleasant­ville, N. J.

The movies attracted many of our young people Saturday afternoon and evening which are being shown in the Jacob Magid Hall. [Moderator's Note: This is the old Civic Hall which is our present fire house.]

Capt. and Mrs. Harry V. Mathis are among the few who celebrated their 50th wedding anniversary here this summer, the date was last Thursday, June 12. They were pleased and sur­prised to receive cards, and several callers at their home. Capt. Harry is among those who go to the Bay for clams and oysters every day and raises a very nice garden every year, even prize onions which he never in­dulges in but gives them to his neigh­bors. Their friends wish them many more years of happy married bliss.

Mr. Julius Warsitzka has returned to his old home from Atlantic City hospital after having undergone a major operation, his friends and neighbors are wishing him a complete recovery.

Prof. and Mrs. Maja C. Mathis are spending a few days at their home on New York Highway this week.

The Rev, and Mrs. Blain Detrick of Cherry Creek, N. Y., are spending a part of their vacation with Mrs. Detricks parents, Mr. and Mrs. James Updike of . They were Tuesday evening Dinner guests of Miss Margaret C. Adams and Mr. and Mrs. William Maurer.

The Rev, and Mrs. C. Goldy attended the graduation exercises at Drew Seminary last Monday when the Rev. Goldy received his B. D. Degree.

Mr. and Mrs. Charles Brown and infant son are visiting with the for­mer’s parents at their home on West Greenbush Road.

The Rev. G. R. Cox and Mrs. Edna Adams visited last Thursday with Mrs. Mary Black and others who are at the Home for the Aged in New Lisbon, N. J.

Mrs. Pitman E. Mathis and Mrs. Virginia Ford motored to Salem Mon­day where they called on Mrs. Mathis’ grand-daughter, Mrs. Clayton Berry, who is confined to the Salem hospital.

Capt. R. H. Johnson has taken his new boat “The Lucky Strike” to Inlet Pier, Atlantic City, where he sails daily from Capt. Stains, taking deep sea parties. His many friends wish him success in his new adventure. 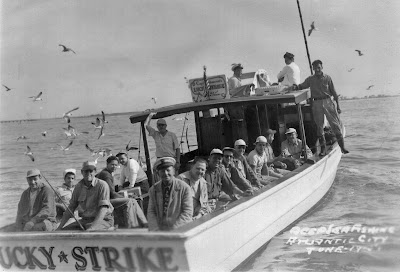 Capt. Howard Johnson's party boat, the "Lucky Strike", sailing out of Atlantic City. Howard is stearing on the bow with his wife, Margaret, sitting to his right. I believe Joe Cramer is the mate standing on the right gunnel. (Photo courtesy of Margaret Sullivan Johnson.)

Hope today's trip back to June 19, 1947 was enjoyable for you. If you saw someone you recognized, drop us a line here at the blog with a little info or story about that person or persons.
Pete S
Posted by Pete Stemmer, moderator at 8:00 AM