Today, it is not unusual to see companies making special offers to lure customers into spending their hard earned money on a particular product. They produce ads touting package deals that give you more bang for your bucks. Last night I saw a TV commercial heralding a two for one deal from Applebee's offering two meals plus an appetizer for only $20.00. Actually, that's three for one. What a bargain! How could I pass that up? It made me want to jump right in my car and hurry on down to Applebee's. 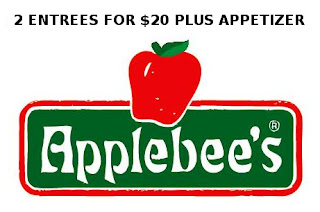 Well, it seems that the more things change, the more they stay the same. The other day I was thumbing through an old scrapbook of newspaper clippings and came upon a 1902 ad offering a 10 for $25.00 deal from Appleby's. Granted, Appleby's was spelled differently and the deal was for land instead of steak or burgers, but the advertising gimmick was still the same. A deal was offered that appeared too good to pass up - ten plots of land at a summer resort for only $25.00 and great terms to boot! How could anyone pass it up?

As I read through the article my interest was peaked. Unlike the present day Applebee's ad which actually produced the product as advertised, this old Appleby's ad offered land that was not what it was purported to be. The headline in the story following the ad shouted out the true nature of the deal. It was scam! 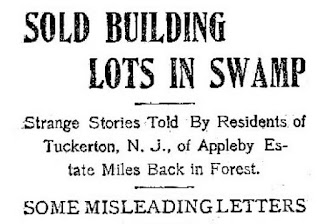 While the ad said that the lots were in a summer resort, the headlines stated that the lots were actually in a swamp. Clearly, something was awry. The mention of strange stories told by Tuckerton residents and misleading letters promised an interesting tale, and I was not disappointed.

The article began with the newspaper suspecting that something might be fishy regarding the land offer ad and an investigation ensued. It seems that the Bulletin was serious about its policy of not knowingly publishing false advertising.

The investigation revealed that the tract of land in question, known locally as the "Applyby Estates" and called "Bay View Park" in North Tuckerton for advertising purposes, was not on the seashore but was actually largely swampland 12 miles from the bay in the Jersey Pine Barrens. 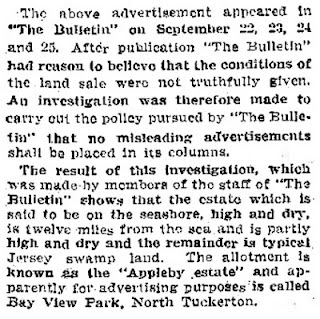 The article went on to say that about 2,000 acres of the Appleby Estate had been sold and that only one man was living there but would be leaving shortly as the property is uninhabitable.

That one man, C. W. Stegemann, was motivated to buy five acres of Appleby Estates property by a personal letter he received from the developer, J. Randolph Appleby. It's no wonder that he made the land purchase. The Wall Street address lent a certain amount of creditably to the enterprise, and Mr. Appleby's description of the property was inviting. I especially had to smile about the part which said "There is no place in the World where a person can get a more comfortable living with so little labor as here." 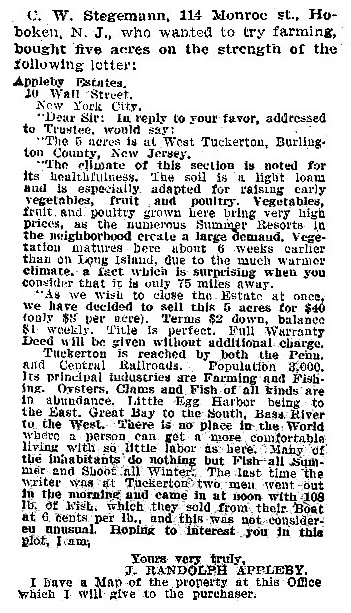 A Bulletin reporter was dispatched to Tuckerton to check out the veracity of the advertisement. Was Mr. Stegemann's conclusion that the property was unlivable correct or were Mr. Appleby's glowing descriptions accurate? I'm sure the reporter got his first clue when he had difficulty finding someone in Tuckerton to take him to Appleby Estates, the property advertised as Bay View Park, North Tuckerton. 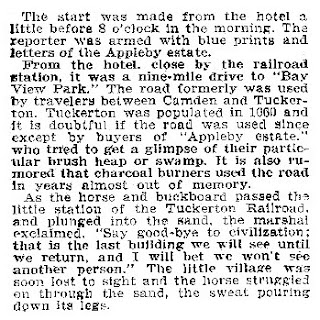 If the reporter had hoped that things would get better as they approach the beautiful countryside described by J. Randolph Appleby, he quickly found out that he was mistaken. The journey became a nightmare. 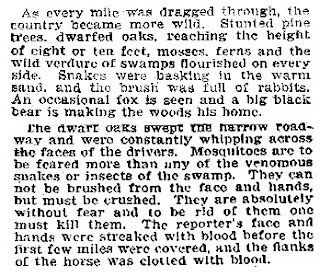 He must have felt like a real city slicker when the wagon driver asked him if he had rubbed himself with kerosene.

Next, he got his first real taste of why they called the land the Jersey Pine Barrens. 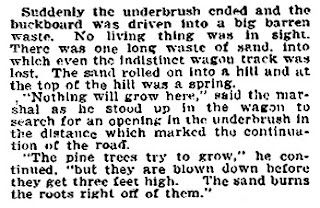 They, again, entered the woods and the driver announced that they had arrived at "Bay View Park" and "West Tuckerton". 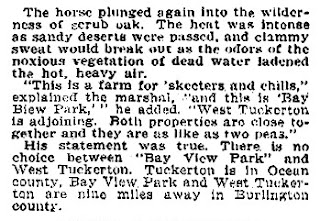 The only residents of Applyby Estates appeared to be snakes. 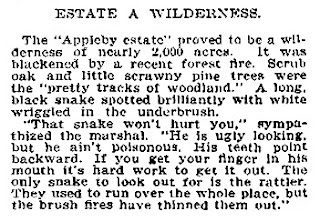 The advertised water view in the area turned out to be a swamp where the mosquitoes were so bad that the reporter became worried about contracting malaria  He wondered if he remembered to pack his bottle of quinine water in his bag that he left at the hotel in Tuckerton. 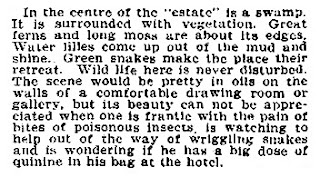 Surely the blueprints that the reporter brought along showing the street layout of Appleby Estates would reveal where they were. To his dismay there was not a street in sight nor any evidence that the area had been surveyed. 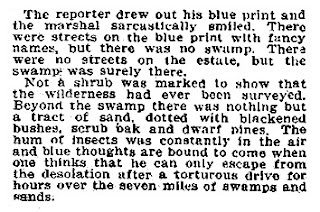 The reporter couldn't believe his eyes and must have been wondering how anyone could call this desolate landscape "Bay View Park". He couldn't wait to get back to Tuckerton and civilization. Neither could the driver. 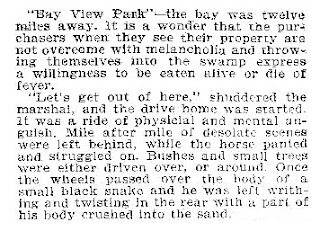 Tuckerton sure was a welcomed site as was the balm that the village druggist applied to the reporter's plethora of mosquito bites .

The reporter discovered that he wasn't the only one to show up in Tuckerton and ask to be taken to Appleby Estates. 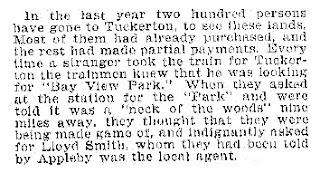 In fact, taking Appleby Estates purchasers to see their dream  properties became a cottage industry for Lloyd Smith who, although he denied being an agent for Appleby Estates, never-the-less was not adverse to making a few bucks off the situation. 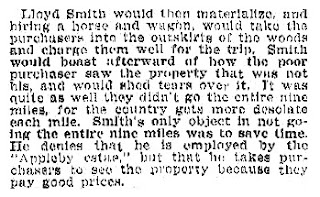 The reporter concluded that the Applebys had been perpetrating this real estate scam for seven years and had made a profit of about $19,000, quite a tidy sum in those days.

Based on the reporter's estimate of more than 1,000 Appleby Estate purchasers visiting Tuckerton to view their land, it appears likely to me that the Applybys probably sold some land more than once. Somehow, I won't put that past them!

The Bulletin article closes with a few stories obtained from unwary purchasers, the first from a Scranton, Pa. coal miner whose first visitor was a black bear. 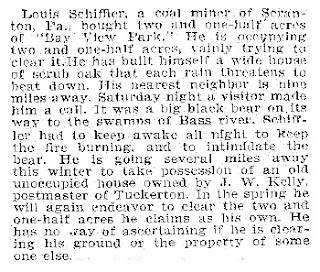 The second is a brief mention of a Texan who arrived with a wagon full of furniture and farm implements for his dream home.

The last was from a Philadelphia doctor who purchased his "estate" as a summer home present for his wife. He produced a letter he received from a friend in Tuckerton who outlined the scam and mentioned that the fraudulent company was selling land throughout the United States. Unfortunately for Dr. Hunter, he received the letter after his purchase of the property. 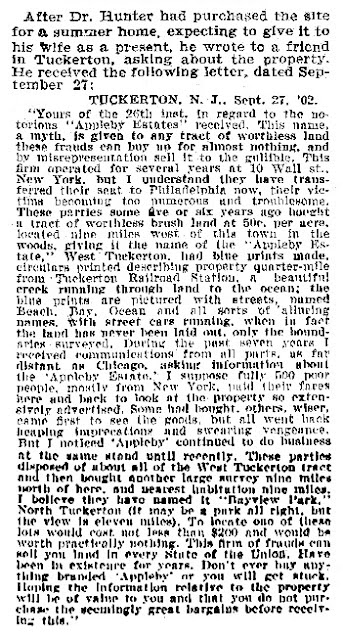 Advertising of Appleby Estates property was not limited to the Philadelphia Bulletin. A history buddy, Paul Schopp, sent me Appleby ads from two other Pennsylvania newspapers, the Philadelphia Inquirer and the Harrisburg Patriot. The July, 1901 Inquirer ad references a Wall Street address while the December, 1901 Harrisburg ad refers to a Philadelphia address. This confirms that the firm did expand from New York to Pennsylvania as Dr. Hunter's friend stated in his letter.

The Appleby Estates story is not an example of American capitalism at its finest moment. It should remind us of an important legal principle expressed in that Latin saying, caveat emptor, meaning "Let the buyer beware." Evidently that principle was a good guideline for yesterday as well as being applicable for today. I'm sure those Appleby Estates purchasers would agree.

Some of you out in the Blog-O-Sphere may think that the Appleby Estates saga is too outlandish to be true. To you I'd like to say that I've got some inside information on some cheap land up in the Jersey Pines where a very good friend of mine has found some golden nuggets in a small out of the way stream. Word of this has not leaked out yet but, when it does, that land will be worth a fortune. If you are interested in making an investment drop me a line here at the Blog.

Pete S
Posted by Pete Stemmer, moderator at 9:40 AM