It's KKKKKKKKKKKKKKKK Kold here in New Gretna this morning! Temperatures last night were registering around zero degrees in our area. That means two things  .   .   .   I'm wearing my woolies, and ice skating season is finally here!
When Jackie and I first moved to New Gretna in the middle 1970's, I can remember some pretty cold winters. In 1974, or perhaps 1975, the temperatures were around zero for over a week. It was so cold that even Great Bay was frozen over. People were driving cars from Graveling Point, at the end of Radio Road in Mystic Island, across the bay to Brigantine. That's some pretty crazy people and some pretty serious ice!
To New Gretna folks back then, Winter marked the beginning of the yearly pilgrimage to Fletchers for ice skating. It was a local ritual and, for a newcomer to New Gretna, a right of passage. It was clearly the winter sport of choice, and Fletchers was clearly the place to go.
Murray and Jean Harris, our next door neighbors in the mid 1970's, invited Jackie and me to accompany them to Fletchers for an afternoon of ice skating. "Fletchers," we said. "Just what and where is Fletchers?" We soon found out, to our delight. After a brief walk out West Road, we made a right turn off the road and across a grassly field and into the cedar woods to find a cedar swamp frozen over and beckoning anyone with skates to "come aboard." This was Fletchers.
I've asked around to try to determine how this beautiful cedar swamp got to be called Fletchers, and the best answer I could get was that some man named Fletcher probably owned it way back when and the name stuck. Funny, though, that no one could remember this man whose name lives on every winter as the temperature drops. If there were a Mr. Fletcher who owned the cedar swamp, he likely lived in the old house where Mark and Frances Ford presently live. When we moved to New Gretna it was called the Les Roe house.
Skating at Fletchers was an experience. There were large open areas upon which to skate, but Fletcher's charm comes from the clumps of cedar trees that raise skyward out of the swamp, forming a rabbit warren of skating trails that add a diversity not found in most skating locations. The trees also provided shelter from the wind and a habitat for a wide variety of wildlife that made our outing even more interesting.
Generations of young and old alike enjoyed many cold, crisp afternoons and evenings at Fletchers. Following are a few photos. 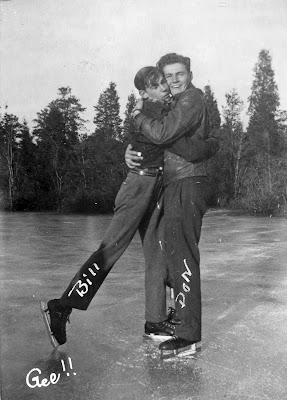 Don Maxwell and Billie Sears ice skating at Fletchers - circa 1944. "Gee, Billie, are you sure that this ice dancing is an Olympic sport?" (Photo courtesy of Betty Lamson West.) 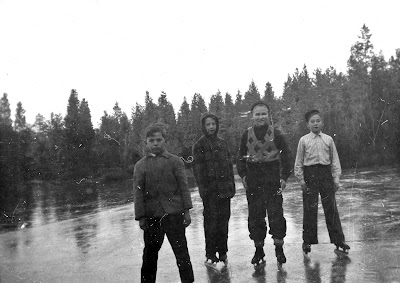 Howard, Jackie, Bob, and Bucky at Fletchers in January, 1945. Can anyone provide the last names of these young men? (Photo courtesy of Betty Lamson West.) 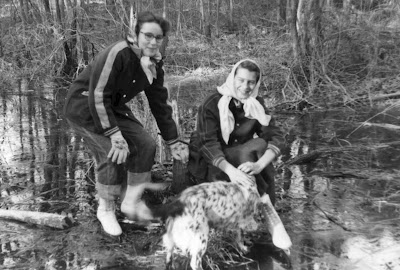 The other preferred location for ice skating in New Gretna was Steam Shovel, a series of elongated pits dug in the early 1920's from Len Sooy's farm to get gravel for the improvement of the old New York Highway running over the meadows to the Mullica River bridge. The deep pits, usually filled with water, freeze in the winter creating a great spot for locals to go ice skating. Steam Shovel was not as beautiful or romantic as Fletchers, but offered good ice skating, never-the-less. 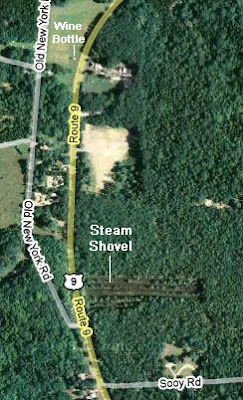 Traveling south on Route 9, Steam Shovel is south of the wine bottle and north of Sooy Road. The deep gravel pits show up as straight water filled trenches on a satellite photo. (Map courtesy of Google Maps.)

The following is a transcription from the January 8, 1921 Mt. Holly Herald describing the road project that resulted in the creation of Steam Shovel. Evidently, the road was in such poor design and condition that it often had to be closed in the winter. That would cause a great inconvenience as traffic would have to go through Lower Bank and cross over the Wading River.

Ross & Whelan, contractors, of , have progressed to such an extent with the improvements to the shore road in the vicinity of New Gretna and that the highway can be used this winter, which is much more than has been possible in winter for many years. The road is across the Mullica river meadows and has been often inundated winters to such an extent as to make it impassable. In order to speed the work on the improvement as requested by State Highway Engineer Wasser, Ross & Whelan constructed a railroad at the operation and have fifty cars, two steam shovels and other machinery, on the operation.  [ Herald

A young man named Steve Potter, the father of the Steve Potter that we know today, came to New Gretna to run the Steam Shovel. He scooped gravel from the pits unto small rail cars which ran the gravel across the meadows to the road project. Apparently, he also made an impression on some of the local young ladies. 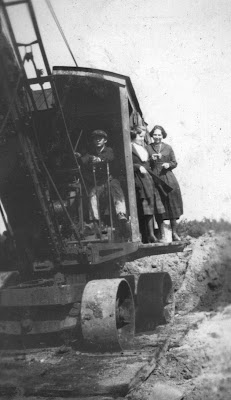 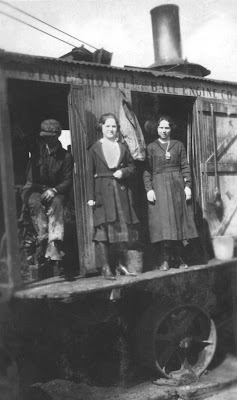 Postscript to the saga of Steam Shovel -
Steve Potter, Sr. who came to New Gretna to run the Steam Shovel was smitten by young Esther Sooy, the young lady in the above photos. The feeling was mutual, and they were married in October, 1923. 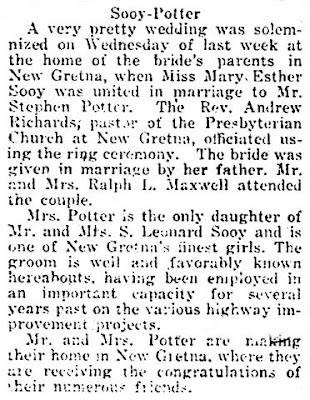 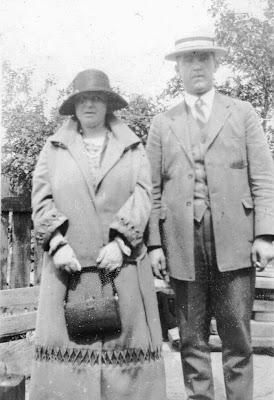 Esther and Steve Potter's son, Steve, married Minnie "Millie" Miller from Tuckerton and came back to live and raise a family in New Gretna. Their three girls (Sheryl who married John Price, Linda who married Steve Mears, and Maureen who married Tom Kane) and their families all live in New Gretna, today. We are all the richer for it and have that old Steam Shovel to thank for making it possible.
Pete S
PS- Official Disclaimer: Today's blog deals with ice skating in New Gretna's past. It is not meant to encourage ice skating at Fletchers or Steam Shovel today. There are different private property and insurance issues today, making ice skating at these locations unwise.
Posted by Pete Stemmer, moderator at 8:00 AM