I've been going to a Men's Breakfast every other Friday morning for the past eight years or so. It's a time of fellowship when a few of the guys get together to chew the fat and, often, talk about the good old days in New Gretna. A few of our Blog readers, including Jim McAnney and Ricky "White Shoes" Steele, often join our breakfast group to swap cherished and, sometimes, long forgotten stories.

The other day, at breakfast, the current lack of eating places in New Gretna was a topic of discussion. Today, the only restaurant in town is Allen's Clam Bar. Such was not always the case. Over the years, New Gretna had many eating places, mostly luncheonettes and small restaurants. Ricky Steele and Jim McAnney happened to mention John's Diner which was just down the street from the Steele family's house and gas station on Route 9. Today it is a vacant lot with no evidence that a diner once stood there. 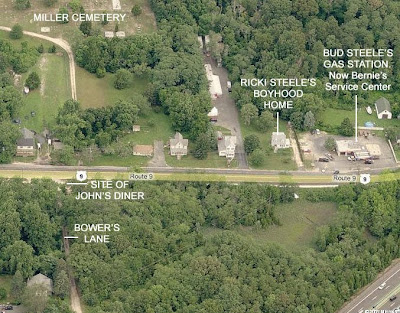 John's Diner was located on Route 9 in New Gretna, at the corner of Bowers Lane, just across the street from the lane leading into Miller Cemetery and just down the street from Ricki Steele's boyhood home. (Map from Bing Maps.)

The diner's history is somewhat murky to me, but I'll share the little that I know. Seems that John Martin came to New Gretna from Philadelphia and had the diner trucked into New Gretna in the early 1950's when the town was a buzz with workers constructing the Garden State Parkway. It was tiny and had a counter with a dozen or so stools. There was one small table that was eventually taken away to make more walking room in the crowded interior.

Although mostly patronized by the construction workers, the diner soon became a popular eating place for many of the locals. I'm told that Billie Sears spent a lot of time there and became good friends with John Martin. It also was a hang out for many of the New Gretna teenagers including Steve Eichinger, Zeke Zerrit, and Bucky Lamson. Steve remembers that Eliot Johnson, who lived on Hammonton Road across from Danny Loveland, cooked for John and that Jeanie Gray and Joyce Maxwell, Donald's sister, waitressed there. 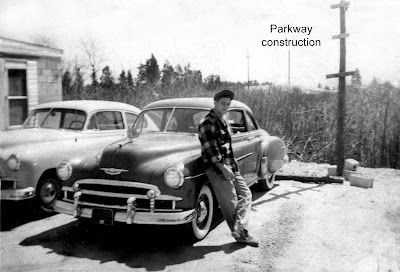 A young Steve Eichinger (circa mid 1950's), who spent a lot of time at John's Diner, leans against his 1950 Chevy coupe in the small gravel parking lot next to the diner. A corner of the diner can be seen on the left. The absence of the thick woods and tall tress that have grown up in that area today allows the viewing of the Parkway construction in the background. Bowers Lane, which led to Ike Bowers' farm, is just to the right of the photo. (Photo courtesy of Steve Eichinger.)

Ike Bowers had an asparagus farm at the end of Bowers Lane. The construction of the Parkway cut his farm in half. It's difficult to tell for sure, but I bet that's Ike's trademark cigar cupped in his right hand. (Photo courtesy of Myrtle Wiseman Falkinburg.) 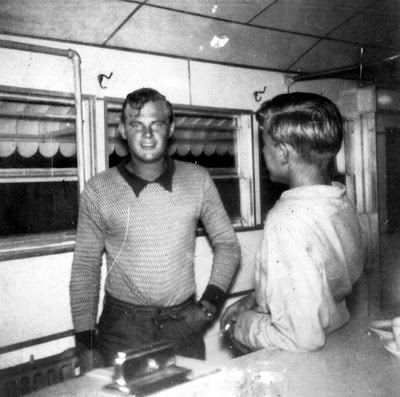 I don't know much about John Martin and his wife, Mae, except that they lived on South Maple Avenue, John ran the diner, and they are buried on the north side of the hill in Miller Cemetery. Mae died in 1960 and John passed away in 1961. There is a small home made marker on John's grave that was made and placed there by Billie Sears, otherwise we would have no record of his burial here in New Gretna. Today, the Joe Capriglione family lives in John Martin's South Maple Avenue home. 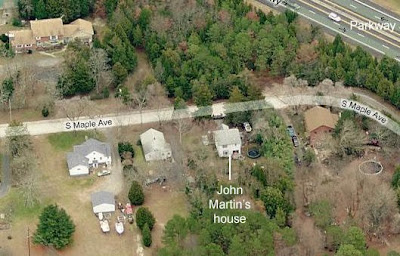 John Martin and his wife, Mae, lived in a small house near the bend on South Maple Avenue. The house has since been expanded. (Photo from Bing Maps.)

The demise of the diner is uncertain in my mind. Steve Eichinger tells met that the diner closed after John was not able to run it due to bad health. If Steve is correct and since John died in 1961, that would mean that the diner would have closed by 1961. This was a surprise to me, since I found an ad from a 1963 New Gretna PTA Minstrel Program Booklet advertising the Bass River Diner. I had always assumed that it was placed there by the person who took the diner over after John died and changed its name to the Bass River Diner. Now, I'm not too sure of that. Perhaps, someone out in the Blog-O-Sphere can shed some light on this situation.

Advertisement from a 1963 PTA Minstrel Program. The question is - Is this from John's Dinner or another New Gretna eatery?

There was a fire at the diner probably sometime around the early 1960's. The damage was extensive, and the diner was likely torn down shortly thereafter. 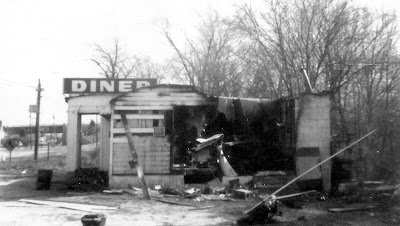 The remains of the diner, probably around the mid 1960's. The parkway bridge over Route 9 can be seen in the top left background. (Photo courtesy of Franklin W. Gray.)

The Herrintown Poet wrote a poem immortalizing John's Diner. I thought I would share it with you here at the Blog. While entertaining, it also gives us a colorful picture of the dinner.

There’s a dining car down the street.
The sign in the window just says .
John, he towed it down from Phillie.
Said he’s famous for his chili. 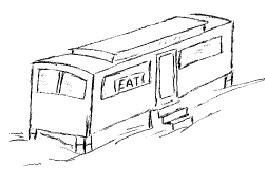 On Bower’s Lane he sat it down
And brought fine dining to our town.

Take three steps up and step inside.
It’s long and narrow, not very wide.
The counter ran the length of it . . .
With stools attached where you could sit.

The coffee urn stood in the center.
Smell of food is heavy as you enter.
John is hunched there in the middle,
Turning pancakes on the griddle
While up the wall curled greasy smoke.
It’s the place to eat when you are broke.

The vat of soup he stirred with a spoon,
And the smell of cabbage filled the room.

A bowl of stew filled to the brim.
This is John’s creme-de-la-creme.

A chunk of bread with crust turned brown
And a cup of Joe to wash it down.

No time in here for social graces.
On their sleeve men wiped their faces.

The whistle blew one windy nite.
When the hose got there it was all a-lite.
Through heat and smoke I heard a holler
“Too late boys!” Save your water.

Morning brought the lookers round
To see where the old car charred the ground.
Where John once served Herrontown’s elite.
And a sign in the window that just said .

Up on the “Hill” there’s a grassy mound
With a sliver of slate stuck in the ground
And stick on letters with Elmer’s paste
Mark John’s final resting place.

But every time I pass that hump,
Up in my throat there comes a lump.
And memory pulls me back through time,
And pictures flash into my mind.

Now years have passed since it melted down,
But I sometimes go and stand around.
And on a day when the air is clear
Familiar smells still linger there.

And when the wind gets round to southard
There a savory odor of onions smothered.
I stand there in the winds that blow,
While salivary juices flow.

Then comes again the vivid scene
Of John a slinging his cuisine.
And stirring up his steaming vat
And the bowls of stew with chunks of fat.

When John’s name is widely sung.
And famous for the hash he’s slung.
Bus tours will stop to look and see
Where John cooked up his fricassee.

In the “Book of Giants” he’ll have a page
And be remembered throughout the age.
And he deserves that place, by gosh!
Herrontown’s “King of goo-losh”

Well, that's about all I have on John's Dinner. I'm hoping that I'll hear more about it from some of our Blog readers, so that I can better complete the picture for posterity.

PS- Can anyone out in the Blog-O-Sphere name any other old New Gretna eating places that no longer exist?
Posted by Pete Stemmer, moderator at 8:00 AM