I got the following message from Laura Matecha who was looking for information on her great grandmother, Mary Adams Brown Holloway who was born in New Gretna in 1867 but lived in Batsto, in Washington Township, most of her life. Laura was looking for suggestions to gather additional information.

My name is Laura Matecha. I am researching my family tree and have hit a road block in New Gretna. I was wondering if you could give me any suggestions. My great grandmother's name was Mary O. Adams Brown Holloway. Her birthdate is February 1867 in New Gretna. She lived in Batsto, NJ most of her life and married Charles Brown and then Joseph Holloway. Any suggestions of where to go from here? I believe that she is buried in New Gretna as well.

As someone who enjoys Bass River history and genealogy, I love a challenge and started a search for Laura's great grandmother. Since Laura reported that she was born in New Gretna in 1867, the best starting place for information seemed to be the 1870 Bass River Township Census. If the family still lived in Bass River three years after Mary's birth, we should find her there. Unfortunately, there was no record of a Mary O. Adams in the 1870 Bass River census. Since Laura didn't provide the names of Mary's parents. I have to assume that they are unknown which makes the search more difficult. Searching the 1870 census in the neighboring communities of Little Egg Harbor, Washington Township, and Randolph Township also failed to turn up a Mary Adams. No one ever said that this genealogy stuff is ever easy.
My next plan was to review the New Gretna Methodist and Presbyterian Church records, hoping to find a birth or baptism record for Mary Adams in 1867. Unfortunately, that did not pan out either. The Methodist Church records that I have don't start until 1873 and my Presbyterian Church records, which begin in 1863, don't mention a Mary Adams.
Since a search for Mary's birth wasn't successful, I decided to move to the end of her life. Laura said that she believed that Mary was buried in New Gretna. If so, she would have been buried as Mary Holloway, the surname of her last husband. A quick look at my Bass River Township cemetery records quickly showed a Mary O. Holloway, born 1867 and died 1940, buried in the Hill section of Miller Cemetery. The last name and birth date match Laura's information. Finally, a break!
After breakfast I decided to ride down to Miller Cemetery and take a photo of the grave stone and look at the surrounding stones to see who may be buried with Mary and what information that may present about Mary's life. I found the grave quickly; however, a look at the surrounding graves was disappointing. Mary was buried by herself in a single grave. There are no members of the Adams, Brown, or Holloway family in the area. However, the existence of a headstone and curbing around the grave suggests that someone cared about her. 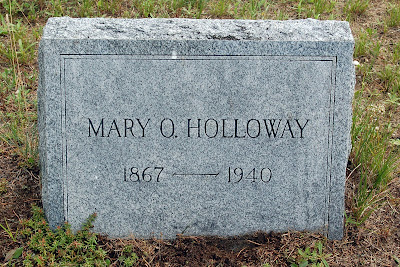 Mary O. Holloway's tombstone to the rear of the Hill Section of Miller Cemetery, confirms Laura's information regarding Mary's birth year and marriage to a Holloway. It also tells us that Mary died in 1940 but, unfortunately, not where. (July 2, 2009 photo by Pete Stemmer.) 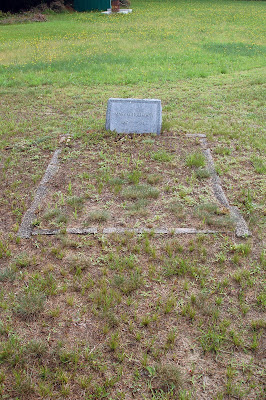 Mary is buried in a single grave which gives us no clues as to a relationship of those buried near her. (July 2, 2009 photo by Pete Stemmer.)

Strange, I murmured to myself. Why would Mary end up buried by herself in New Gretna? From 1870 through the 1930 Bass River census reports there was no record of Mary living in Bass River, either as Mary Adams, Mary Brown, or Mary Holloway. There must be some continued family connection with Bass River if she ended up buried here, especially since Laura reported that Mary had lived most of her life at Batsto. Older Miller Cemetery records are spotty, at best, and I was not able to find out who purchased Mary's grave from the New Gretna Old Home Society records. (Note: The New Gretna Old Home Society is the name of the non profit organization that owns and maintains Miller and Hillside cemeteries in New Gretna.)
Shirley Whealton and I have been working on collecting area obituaries and organizing them in a computer database. So far we have over 5,000 obituaries in the database, including 17 Holloways. Unfortunately, none of them are related to our Mary Adams Brown Holloway mystery.
A trip to the Internet seemed advisable. My first stop was the LDS Family Search site found at: http://www.familysearch.org. I typed in "Mary Adams, United States, birth 1867, State of New Jersey" and got the following hit that looked promising: Mary A. Adams, born 01 MAR 1867 in Bass River Township, Burlington, New Jersey. Parents: John and Phebe A. Adams. The middle initial did not match; but it's not unusual for an "A" to look like an "O" given variations in handwriting styles. Laura said that Mary was born February, 1867, so close to March 1, 1867 for me not to believe it was a coincidence. This may be our Mary! Unfortunately, the source of the LDS information was not given.
Shirley Whelaton, my genealogy buddy, who knows more about local family genealogy than anyone I know, reports that Little Egg Harbor marriage vital stratistics, 1848-1880, show John S. Adams, 22, Bass River, marrying Phebe A. Cobb on October 11, 1862. This is likely Laura's great-great grandparent's marriage. Remember, Bass River Township was still a part of Little Egg Harbor prior to May, 1865.
I figured I might be on to something with this John and Phebe Adams connection, so I went back to the 1870 Bass River Census and searched for the John and Phebe Adams Family. They were listed as Household 145 with three children: Rebecca A. (Age 6), Ophelia O. (Age 3) and Augusta M. (2 months). No Mary A. as listed in the LDS records, so it's unlikely that the census was the source of the LDS information. No help there.
The 1880 Bass River census lists the John Adams family as Household 118. His wife Phebe is not listed and has probably passed away. The following children are listed: Rebecca A. (Age 17),Ophelia (Age 13), and Augusta M. (Age 10). Shirley Whealton, points out that Ophelia may be our mystery Mary O. Her name might be Mary Ophelia which is reported Olphilia in some census records. That is a possibility.
My next stop on the Internet was Ancestry.com. I typed in three different combinations: Mary Adams, Mary Brown, and Mary Holloway in Bass River, Washington Township, and Randolph Townships. I hit pay dirt in the 1900 Washington Township census where Charles and Mary O. Brown are listed in Household 119, having been married for 15 years, with a daughter, Nettie M. (Age 14).
The 1910 Washington Township census shows that Mary had remarried Joseph H. Holloway in 1905. They are listed in Household 6, as having been married 5 years, with two sons: Paul (Age 4) and Charles (Age 2 months). Mary is listed as having a total of 4 children with three still living. The extra two children resulted from her earlier marriage to Charles Brown. Nettie would have been 24 years old and not living with the new Holloway family. There probably was another sibling who had died.
Well, that's about all the information I could find on Mary Adams Brown Holloway. Hopefully, it will be a help to Laura. I sure would love to know how Mary ended up in a lonely grave on the hill at Miller Cemetery. Perhaps, someone out in the Blog-O-Sphere may be able to shed some light on that mystery and maybe provide a photo of Mary.
Pete S
Posted by Pete Stemmer, moderator at 8:00 AM