I got the following email from Ryan D. and thought I would try to provide some information and photos to satisfy his curiosity.

I love reading your blog. I am trying to locate some history on and pictures of the oyster house on Amasa Landing road. Do you have anything?

Daniel Arnold Cramer started the oyster business around 1900 on Tuckerton Creek. In 1937 he decided to expand the business to New Gretna. He gave the Tuckerton business to his son, Harold, and built the Oyster House on the Bass River at the end of Amasas Landing Road. 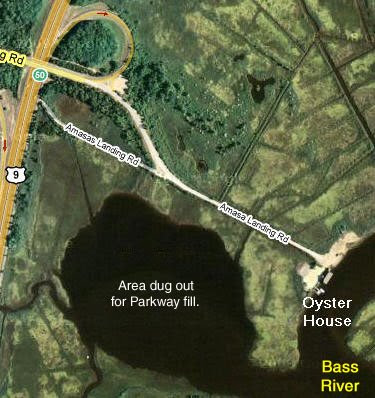 The Cramer Oyster House is located at the end of Amasas Landing Road in New Gretna. (Map courtesy of Google Maps.)

The New Gretna business passed to Daniel Arnold's wife, Gertrude, upon his death in 1944. Harold went to New Gretna to run the business for his mom. Upon her passing, in 1948, the business went to her sons, Harold and Pratt.
The two main boats used at the Oyster House were the "Jesse G", the oldest, and the "Dreadnaught". The "Jesse G", built in 1903, was an old ferry used between Toms River and Sea Side. Daniel Arnold purchased it from it's builder and captain, Jesse Grant from the Bayville area. The boat was named after Grant. It was scrapped in 1971. 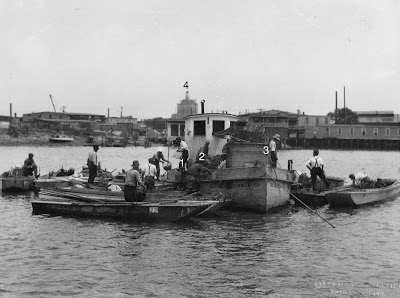 The "Dreadnaught" blew it's engine around 1981 and was sunk, a stone's throw from the Oyster House, in the pond that was created when sand was dredged for the construction of the Garden State Parkway. 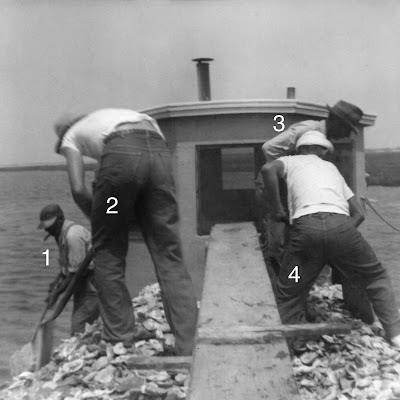 The Oyster House was sold outside the Cramer family in 1982, after Harold's death. The buyer, Donald Metzger, bought the property to develop into a restaurant, but his plans never panned out due to complications regarding the fragile wetlands environment in the area.

There may be some confusion regarding my statement that Daniel Arnold Cramer started the shellfish business, as he went by the name of Arnold throughout his life. His friends simply called him "Bisquit". Most of his contemporaries were not aware that his first name was Daniel. The 1880 census documents this by listing Daniel A. as the youngest of Caleb S. and Mary J. Cramer's four children.

The name issue is further confused by the 1900 census which does not mention the name "Daniel" but lists "Arnold". It's a genealogist's nightmare! The tip off that they are the same individual is that their ages correspond and Daniel's middle initial in the 1880 census is "A".

All of the documentation that I have seen, with the exception of the 1880 census, regarding Daniel Arnold lists his name as simply Arnold. His World War I and World War II Draft Registration Cards are examples of this. They were even signed as Arnold Cramer. 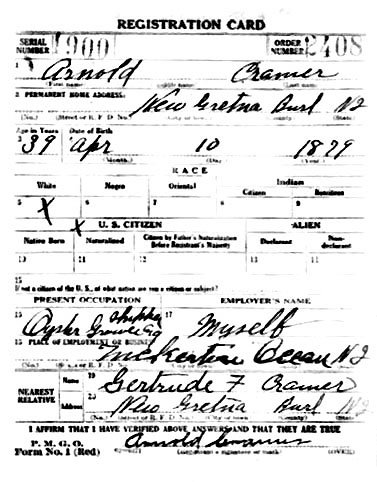 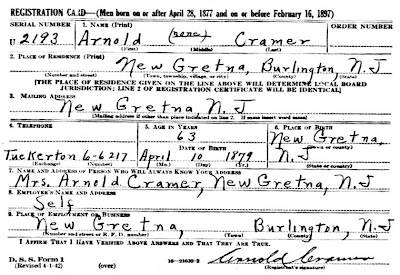 Daniel Arnold's obituary also identified him as "Arnold" rather than "Daniel".

Tuckerton Beacon Obituary
His tombstone is also inscribed with the first name of Arnold. 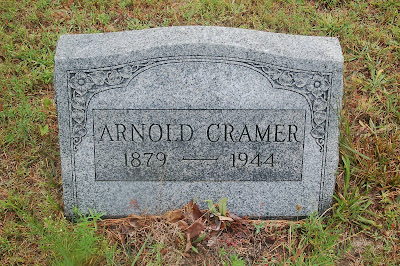 Tuckerton Beacon Obituary
The paperwork I was finding with Arnold as the first name got me to doubting the 1880 Federal Census listing of his first name as Daniel, so I called Bisquit's grandson, Arnold Nathan Cramer, to clarify the situation. Arnold told me that his grandfather's first name was, indeed, Daniel but emphasized that he never went by it. Even many family members were unaware of his real first name. Evidently, the use of a middle name as a first name was a Cramer family tradition. Daniel Arnold had two brothers, Caleb Earl and John Pratt. They both went by their middle names, Earl and Pratt. 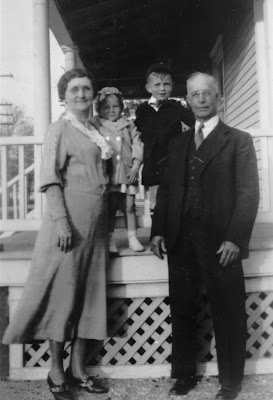 Daniel Arnold "Bisquit" Cramer, his wife, Gertrude, with two of their grandchildren, Jim and Helen, in 1934. (Photo courtesy of Arnold Nathan Cramer.)

Arnold and Gertrude lived and raised their family in their New York Road, now Route 9, home which sits adjacent to the present New Gretna Post Office. 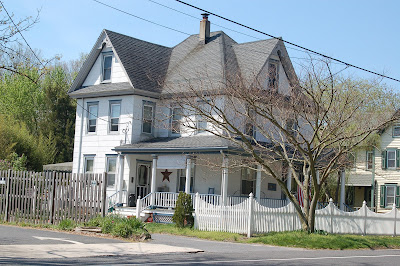 Arnold and Gertrude had two sons - Harold French Cramer and Arnold Pratt Cramer. Harold went by his first name, but his brother, in the family tradition, was called Pratt, his middle name, rather than Arnold, his first name. So we have a siutuation where Daniel Arnold, whose first name was not Arnold, was called Arnold and Arnold Pratt, whose first name was Arnold, was not called Arnold. He was called Pratt. Following Me? Confused? Welcome to the club!
Harold French Cramer (1907-1982) married Florence Cox (1907-1996) from West Creek. Their children were James H., Arnold Nathan, Helen Marie, and Edith Mae.

Tuckerton Beacon Obituary
The Cramer Oyster business also operated out of Townsends Inlet where it mostly catered to fishing and sailing parties in the summer. Pratt handled most of the Townsends Inlet business. Arnold Nathan Cramer, Bisquit's grandson, wrote an informative letter to Shirley Bailey, the owner and editor of "South Jersey Magazine". It gives an excellent overview of the family business and the boats that they owned and operated. Note that Arnold's middle initial is misprinted "M" instead of "N". 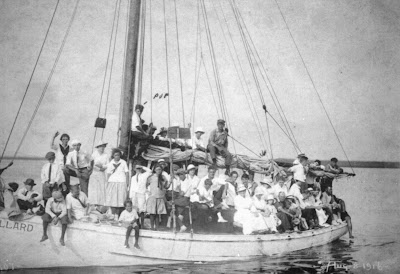 The Allard on an August, 1916 Summer cruise out of Townsend's Inlet. (Photo courtesy of Arnold Nathan Cramer.) 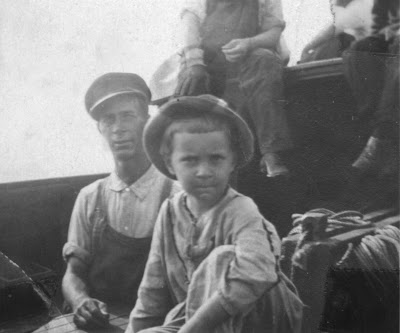 Following are some photos of the Cramer Oyster House on the Bass River at the end of Amasas Landing Road. 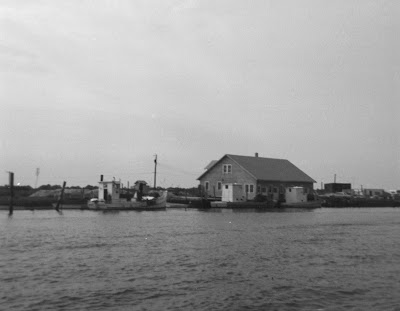 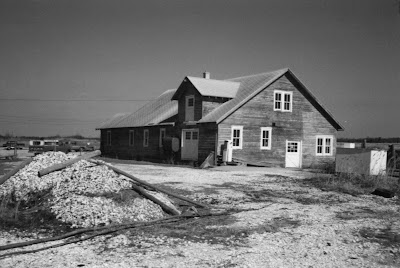 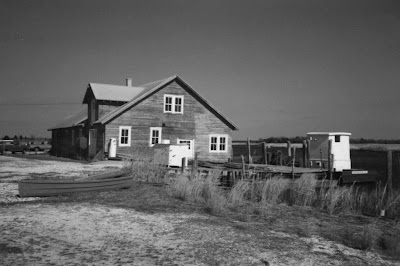 The "Dreadnaught" docked at the Cramer Oyster House in 1981. The "Dreadnaught" was built in the late 1920's for Walt Allen from Tuckerton and sold to D. Arnold Cramer about 1930. (Photo courtesy of Arnold Nathan Cramer.) 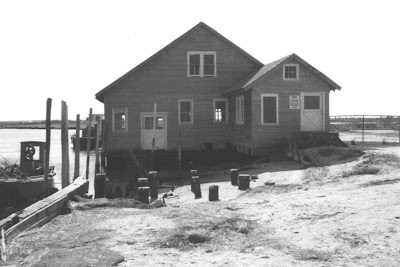 Steve Potter's garvey (foreground) and the "Dreadnaught" tied up at the Cramer Oyster House in 1981. (Photo courtesy of Arnold Nathan Cramer.) 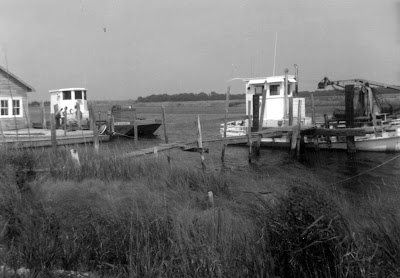 The "Dreadnaught" (left) and Harold Bicken's "Vigilant" tied up at the Cramer Oyster House. (Photo courtesy of Harold Nathan Cramer.) 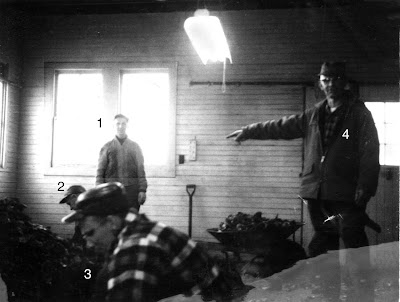 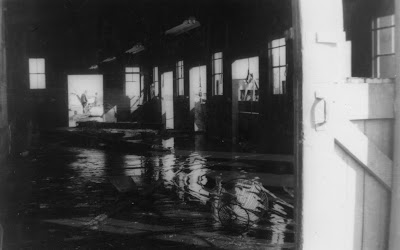 The 1950 storm at the Cramer Oyster house. (Photo courtesy of Arnold Nathan Cramer.) 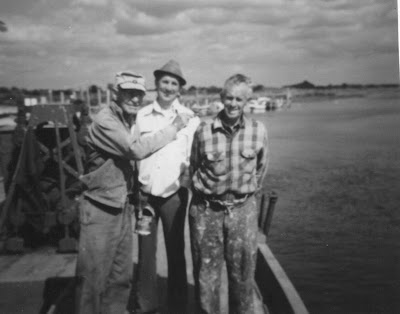 Well, I hope I was able to satisfy Ryan's curiosity about the Cramer Oyster house and provide some family information for all the genealogists who may be reading the Blog.
Pete S
PS- Is there anyone out in the Blog-O-Sphere who can tell me how Arnold got the nickname "Bisquit"?
PPS- You may have noticed the GPS coordinates in some of the photo captions. Our history group has acquired a handheld GPS unit, thanks to the encouragement of John Yates and the advise of Jim McAnney. We will be using it to identify the location of various history related sites here on the Blog.
Posted by Pete Stemmer, moderator at 8:00 AM