Somehow, I've gotten on the theme of Weddings. It must be because it's June, the traditional month for "tying the knot". Now, there's an interesting expression. Surfing the net, I was surprised to find that no one is exactly sure of its origin. Following are three theories, so take your pick. I sort of like the third one.
Last Monday, we dealt with a traditional New Gretna wedding. Today, we turn to the unusual - a Tom Thumb Wedding.
First some background -
Charles Sherwood Stratton was born in Bridgeport, Connecticut on January 4, 1838 to Sherwood Edward Stratton, a carpenter, and his wife, Cynthia. He was a large baby, weighing 9 pounds 8 ounces and developed and grew normally for the first six months of his life. Then, at 25 inches tall and weighing 15 pounds, he stopped growing. By the age 4, Charles had not grown an inch or put on another pound. Aside from this failure to grow, he was a totally normal, healthy child.
P.T. Barnum, the circus impresario, who knew Charles' father, saw an opportunity to exploit the young boy's diminutive size and signed him to a contract. Charles was taught to sing, dance, and perform routines, including impersonating characters such as Cupid and Napoleon Bonaparte. Given the stage name, General Tom Thumb, he went on a national tour at the age of 5. The tour was a huge success and moved to Europe a year later where Charles performed to large crowds and royalty, performing twice before Queen Victoria. He made large amounts of money for Barnum and his family. 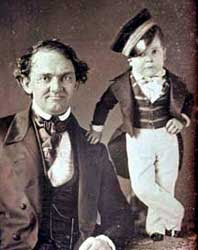 He began slowly growing, at age nine, and was only two feet 8 1/2 inches tall by his 18th birthday. He continued to be a huge draw for Barnum's circus. He fell in love and, on February 10, 1863, married Lavinia Warren, also a little person. Barnum, always the opportunist, staged a magnificent wedding ceremony that became front page news both in the United States and Europe. The wedding took place at Grace Episcopal Church in New York. The best man was George Washington Morrison, another of Barnum's dwarf circus performers known as "Commodore Nutt". Lavinia's smaller sister was the maid of honor. 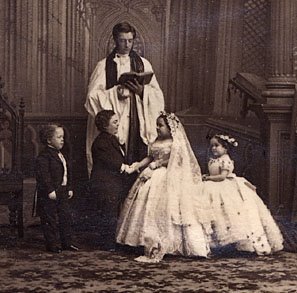 A reception followed at the Metropolitan Hotel where the happy couple stood atop a grand piano to greet some 2,000 guests. A few days later, Tom Thumb and his bride were received at the White House by President Lincoln and began a world tour including Europe and the far east. 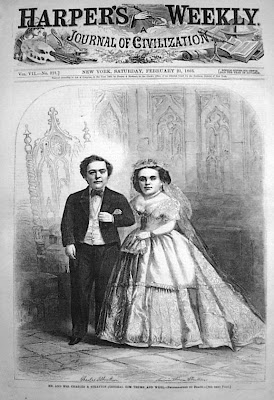 Tom Thumb's wedding was featured on the cover of Harper's Weekly Magazine. (Photo from Google Images.)

Under Barnum's skillful management, Stratton became a wealthy man. He owned a mansion in a fashionable part of New York, a second home in Bridgeport, Connecticut, and many luxuries including a steam yacht. Ironically, when Barnum made some bad investments and got into financial trouble, it was Tom Thumb that bailed him out. Later, they even became business partners. 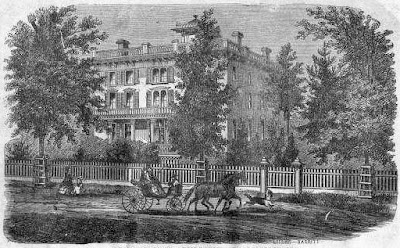 As I said earlier, Tom Thumb's wedding was a highly publicized and lavish event that captured the hearts and minds on both sides of the Atlantic. Americans adored the spectacle, and a humorous play based on the wedding titled a "Tom Thumb Wedding" was performed by community troupes throughout the country. The play used small children in the roles of Mr. and Mrs. Tom Thumb. Over the years, the play evolved into a popular fund raising event for schools and churches. After all, parents and friends loved to come and see their children perform. Tom Thumb Weddings were particularly popular in the 1920's and 1930's and were staged into the 1970's when they became politically incorrect. 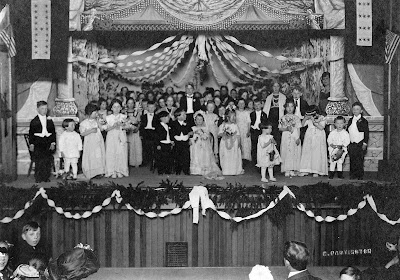 A circa 1940's Tom Thumb wedding. (Photo from Google Images.)

What does all of this have to do with New Gretna? Well, that's the rub. I'm not quite sure. I have the following mid 1930's photo of George Allen and his little sister, Sarah, dressed as husband and wife, that I believe is related to a Tom Thumb Wedding held here in New Gretna, but I can't verify that fact. I've spoken to some New Gretna old timers recently, including Ben Allen who is George Allen's older brother and Howard Ware who married Sarah for real, but no one seems to remember a Tom Thumb wedding here in New Gretna. 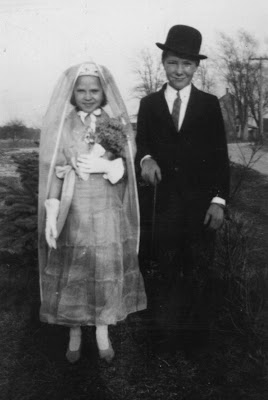 It is likely that George and Sarah were the principal characters in a Tom Thumb Wedding play held as a fund raiser at the local school or the Presbyterian Church. That's the only logical explanation for the photo. I'm hoping that some of our New Gretna old timers out there in the Blog-O-Sphere, perhaps Don Maxwell, Dave Kalm, or Clif Brown, might remember attending or hearing about a Tom Thumb Wedding here in New Gretna and give us an account of their recollections.
That ends our little Wedding Trilogy here at the Blog; however, don't be surprised if we occasionally highlight a New Gretna wedding now and then.
Pete S
Posted by Pete Stemmer, moderator at 11:00 AM