What's In A Name?

Those of you who have been reading the Blog for some time know that I enjoy 5 generations photos and have been encouraging readers to send any in that they may have of their families. We've published quite a few over the last few months.
Well, I received what turned out to be a unexpected surprise a week or so ago when I received another 5 generations photo in our Bass River History email account. After looking at the photo and reading the senders name, Elaine Millward, and family name, the Bradbury-Millward family, I scratched my head as the Millward and Bradbury surnames sounded foreign to me. They just didn't have a New Gretna ring. 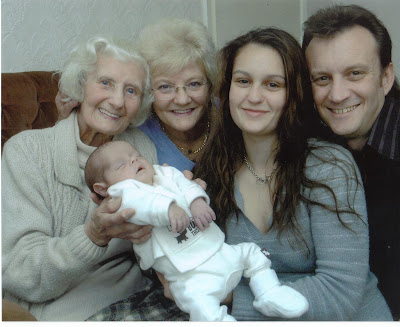 Glancing at the email address of the sender further confused me, as the ".co.uk" suffix indicated that it came from somewhere in the United Kingdom. Wow, I thought. I knew the Blog was being read across the country, but I had no idea, until now, that it was being read in other parts of the world.
I wrote back to Elaine, asking her how she came to view our Bass River History Blog and how her family's 5 generation photo was connected with New Gretna. She replied that she had a 5 generation family photo and wondered if they were common. She searched the term "5 generation photo" on the net and came across our Blog site. Initially, she didn't even realize that it was a site in the United States. She enjoyed the site and decided to share her photo with us, even though it had no direct connection with New Gretna. What a delightful lady!
We started emailing back and forth and, to my surprise, I did find an unexpected connection between the Millward family and New Gretna. The Millwards live in Birmingham, England, a city of just over a million, in England's West Midlands. She went on to tell me that her son, Roger, who is in the 5 generation photo, is presently in the United States on a 3 week tour including traveling along the famed Route 66.
By now you're probably thinking "What in the world does all this have to do with New Gretna?" I'm getting to that. While the photo doesn't have anything to do with New Gretna, I was to find out, in our email exchanges, that Elaine and her husband do have a New Gretna connection but were unaware of it. The photo below of their holiday at Gretna Green, Scotland, shows the connection. 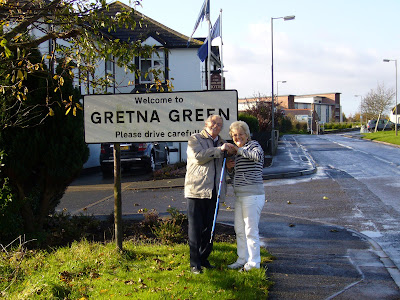 By now, I suspect you see the New Gretna connection, however obtuse. The Millwards, as many English do, visited Gretna Green, the Sottish hamlet from which New Gretna was named.
Gretna Green's claim to fame, since the early 1750's, has been the ability to easily marry. Such was not the case in England when Parliament passed the 1753 Marriage Act which set strict standards for marriage. A formal church ceremony was required, thus abolishing common law marriage, and the consent of parents was necessary if both parties were not at least 21 years of age. Even with parental consent, the marriage would not be allowed unless the groom was at least 14 years old and the bride at least 12. Previously, couples could be married at seven years of age. Particularly pertinent to our story was the fact that the Marriage Act specifically exempted Scotland.
Another departure from English law was the Scottish custom giving almost anyone the authority to conduct weddings if the vows were made before two witnesses. Needless to say many English men and lassies decided to cross the border into Scotland to get married. Gretna Green's location, close to the England-Scotland border, made the town the marriage destination of choice. Scottish folklore says that the old Blacksmith Shop at Gretna Green became the center of this marriage trade due to the high esteem of the blacksmith trade resulting in their being asked to officiate wedding ceremonies. They became popularly known as the "anvil priests". 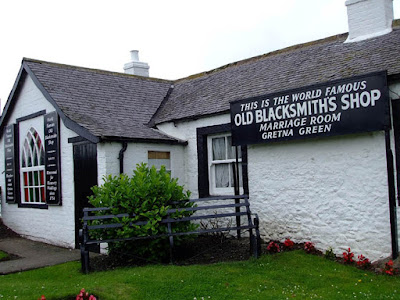 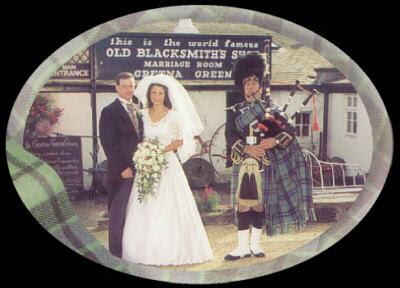 New Gretna old timers should recall our local situation, somewhat similar to that of Gretna Green, some years back when it was fashionable to elope to Elkton, Maryland for a quicker, hassle free marriage. One New Gretna couple that comes to my mind when Elkton, Maryland marriages are mentioned is Ben and Elaine Allen. I'm sure that there were many others. 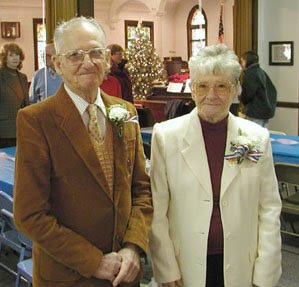 What does the marriage business in Gretna Green, Scotland have to do with New Gretna, you may ask. Well, just as some enterprising businessmen in Gretna Green fostered the marriage business to increase business and prosper themselves and the town, tradition says (That's a fancy way of saying no one can actually document the facts.) that just prior to 1850 there was a local movement to renamed the town New Gretna Green with the idea of making it a marriage center. The name change would highlight the town's attraction. Unfortunately, New Jersey law proved unfavorable to "marriage mills" and the idea was abandoned with the town name shortened to New Gretna.
Old postal records and some of the old maps of the area tend to support this tradition. The name New Gretna appears to have been first used in 1850 when Joseph B. Cramer was appointed postmaster of the New Gretna Post Office. The first map to identify the village as New Gretna is the 1858 Kuhn & Janney map of Burlington County which shows the New Gretna village area about the same as it is today. 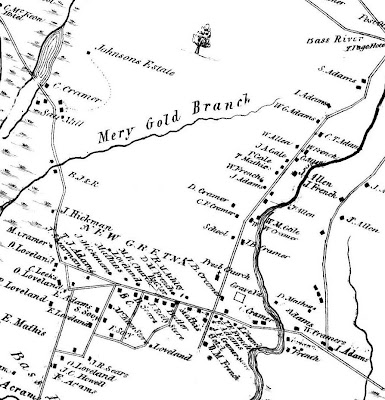 New Gretna is the name of the town center on the 1858 Kuhn & Janney map of Burlington County.

While it was fashionable to call the town center of present day Bass River Township New Gretna, I could find no evidence that the name was ever officially adopted. Back in the 1850's Bass River Township did not exist. It was a part of Littler Egg Harbor Township until May, 1864. I searched the Little Egg Harbor Township minutes throughout the 1800's and could find no mention of "New Gretna" nor any other reference that "New Gretna" was a political entity. Exactly how it came to be placed on maps is a mystery, but it's use continues to this day. 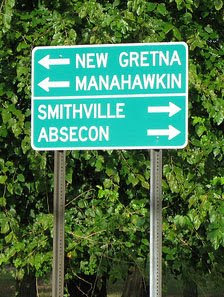 New Gretna can be found on many road signs throughout the area, even though documentation cannot be found to indicate that it is, or ever was, the official name of the town. (Photo courtesy of Google Images.)

In closing, I would like to thank Elaine Millward for sending me her 5 generation photo. It showed us how small our world is becoming and led to an interesting look at the origin of our town's name. I hope all of you out in the Blog-O-Sphere agree.
Pete S
PS- If you are interested in the names of the various neighborhoods in Bass River Township, including "New Gretna", please click on the link below to read "Bass River And Its Neighborhoods" in the October, 1998 edition of the Bass River Gazette:
http://bassriver-nj.org/pdf/h-gazette02--oct-1998.pdf
Posted by Pete Stemmer, moderator at 8:00 AM