Tuckerton - the 3rd Port of Entry NOT

A week or so ago, I bumped into an acquaintance in the Tuckerton WaWa. We got to talking about some historical aspects of Tuckerton and he mentioned that Tuckerton was the third Port of Entry into the United States. Immediately, my hackles were raised and a spirited discussion followed, as I told him that it was not true. Tuckerton was not the third Port of Entry into the United States as commonly thought by many local residents.
A few years ago I wrote an article on the subject which appeared in the newsletter of the Tuckerton Seaport. For those of you who didn't read the article I am reproducing it below. I hope you find it enjoyable and informative.

The Port of Tuckerton

Anyone who has done any work on their family genealogy has come across an interesting story or two about a relative. Usually appealing, if not totally truthful, these stories are not documented but somehow are accepted as fact. Great-great granddad Andrew told great grandma Sarah who told Aunt Ethel, so it must be true that we are related to George Washington. Genealogists call these verbally transmitted stories family tradition. They usually are rooted in some truth that inevitably gets embellished and romanticized.

We should know better. After all, didn’t we all play a game called telephone when we were kids where a simple sentence whispered from ear to ear became so twisted that by the time it reached the end of the line we couldn’t help laughing? What’s the harm if we embellish the story a little? It sure makes life more interesting.

Ever since I moved to this area twenty five years ago I have heard that Tuckerton was the third port of entry into the United States. I’ve even read it in some books written by respected historians. Pretty impressive, I thought - a little town like Tuckerton being so nationally prominent. Wow! Well, I should have known better. 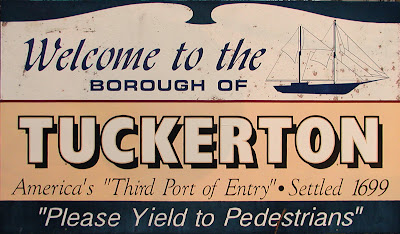 A Route 9 sign on the southern approach to Tuckerton proudly proclaims Tuckerton as America's "Third Port of Entry."

While surfing the net the other day, I came across some interesting documents relating to Little Egg Harbor and Tuckerton as federal ports. I couldn’t help smiling and remembering that amusing game of telephone as I read through them. It seems Aunt Ethel and Tuckerton have something in common, that old bug-a-boo, family tradition.

A reading of the Laws of the United States and Acts of Congress as they deal with the regulation and collection of duties on ships, goods, wares, and merchandise imported into the United States reveals the truth about Tuckerton and it’s role as a federal port.

The First Congress of the United States met in New York from March 4th through September 29th, 1789, and on July 31, 1789, established districts and ports for the new country. New Jersey was assigned three districts: Perth Amboy, Burlington, and Bridgetown with Little Egg Harbour being particularly singled out as a port of delivery in the Burlington district.

. . . The district of Burlington shall comprehend that part of the said State [New Jersey] known by the name of West Jersey, which lies to the eastward and northward of the county of Gloucester, with all the waters thereof, heretofore within the jurisdiction of the said State, including the river and inlet of Little Egg Harbour, with the waters emptying into the same, and the sea coast, sound, inlets and harbours thereof, from Barnegat to Brigantine inlets, in which district the landing places of Lamberton and Little Egg Harbour shall be ports of delivery only; and a collector shall be appointed for the district, to reside at Burlington, and a surveyor at Little Egg Harbour. . . [Acts of the First Congress, Statue I, Chapter 5, Section 1, page 32]

The second session of the First Congress (January-August, 1790) saw no change in the status of Little Egg Harbor as a port; however, an additional district, Great Egg Harbor, was created on August 4, 1790.

On February 16, 1796 Ebenezer Tucker requested that the House of Representatives establish a separate district of Little Egg Harbor and that a collector be appointed to reside at Tuckerton.

. . . Also, a memorial of Ebenezer Tucker, surveyor of the port of Little Egg-harbor, in the State of New Jersey, in behalf of himself and other citizens of the said State, praying that the waters, bays, rivers, and creeks, from Barnegat inlet to Brigantine inlet, inclusive, may be established as a separate District, and a Collector appointed for the same, to reside at the town of Tuckerton. . . [Journal of the House, February 16, 1796, page 414]

Evidently Tucker had some influence in such matters as the House adopted a resolution establishing Little Egg Harbor as the fifth district in New Jersey and officially classifying it as a port of entry. [Journal of the House, May 2, 1796, page 534] The House Resolution was quickly followed by a statute enacted by Congress on May 27, 1796:

Be it enacted by the Senate and House of Representatives of the United States of America in Congress assembled, That from and after the last day of June next, there shall be established, the following new districts . . . In the State of New Jersey, a district, to be called the district of Little Egg Harbor, which shall comprehend all the shores, waters, bays, rivers and creeks from Barnegat inlet to Brigantine inlet, both inclusively; and the town of Tuckerton shall be the sole port of entry for the said district; And a collector for the same shall be appointed, to reside at the said town of Tuckerton; and thenceforward, the office of surveyor for the port of Little Egg Harbor shall cease. [Acts of the Fourth Congress, Statue I, Chapter 35, Section 1, page 476]

So, what did my journey on the Internet accomplish? It showed me that the notion that Tuckerton was the third port of entry into the United States is, like most traditions, only partially true. It was, in fact, a port of entry but only one of many in the country and one of five in the State of New Jersey. Do these facts diminish the importance of Tuckerton and it’s namesake, Ebenezer Tucker? Certainly not. We can all still be proud to be Tuckertonians or “honorary Tuckertonians,” as the town looks forward to a renewal of it’s maritime history thanks to the Seaport Project and its many supporters.

So, the next time you are at the WaWa and hear someone say that Tuckerton was America's third Port of Entry, turn to them and say, "Excuse me, but . . ."

Posted by Pete Stemmer, moderator at 8:42 AM